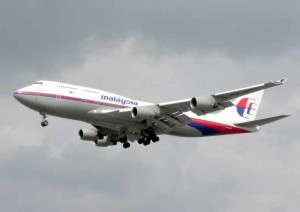 A Malaysian Airlines flight crashed Thursday in Ukraine near the Russian border, with all the 280 passengers and 15 crew members on board feared to have been killed. There were conflicting reports on how the plane went down, with some suggesting it might have been shot down.“A Malaysia Airlines Boeing 777, which was flying from Amsterdam to Kuala Lumpur, started descending 50 km before entering Russian airspace, and was subsequently found burning on the ground in Ukrainian territory,” Xinhua quoted an Interfax news agency aviation source as saying.The plane disappeared from the radar at 10,000 metres and then crashed near the city of Shakhtarsk in conflict-hit Donetsk region in eastern Ukraine, according to Ukrainian law enforcement authorities.An advisor to Ukrainian Interior Minister Anton Herashchenko wrote on his Facebook that “280 passengers and 15 crew members have been killed”.US President Barack Obama spoke on the telephone with Russian President Vladimir Putin soon after news about the crash was received.A White House spokesman said Obama had asked to be kept updated on the developments and told his officials to be in touch with their Ukranain counterparts.A group of emergency services personnel is on the way to the crash scene.“MAS has lost contact with MH17 from Amsterdam. The last known position was over Ukraine airspace,” Malaysia Airlines tweeted. Ukrainian President Petro Poroshenko said the plane could have been shot down, but the Ukrainian Armed Forces had nothing to do with it. “We do not exclude that the plane was shot down and confirm that the Ukraine Armed Forces did not fire at any targets in the sky,” Poroshenko said in a statement posted on the president’s website. Prime Minister Arseny Yatsenyuk said the government has formed a special investigative commission for the incident.The Ukrainian Prosecutor General’s Office said that law enforcement authorities could not access the crash site for investigation, as it is controlled by the self-proclaimed Donetsk People’s Republic (DPR).Andrei Purgin, first deputy prime minister of the DPR, said the first militia units had reached the crash site and found many children dead.There were reports saying that the plane was shot down by the eastern Ukrainian militants, which was immediately denied by the DPR leadership.“The plane was shot down by the Ukrainian side. We simply do not have such air defence systems, our MANPADs (man portaable air defence systems) have a firing range of only 3,000 to 4,000 metres, while passenger jets fly at a much higher altitude,” Xinhua cited Interfax as quoting DPR officials.The militants said they did not rule out that the plane could have been brought down by Ukrainian servicemen.BBC online carried a tweet by Malaysian Prime Minister Mohammed Najib following the incident stating: “I am shocked by reports that an MH plane crashed. We are launching an immediate investigation.”This is the second major tragedy for Malaysia Airlines this year after flight MH370 with 227 passengers on board went missing on a flight from Kuala Lumpur to Beijing March 8 and has still not been traced.