Baptized in the fire of Kashmir’s violent times, Dr Mehbooba Mufti has proved her nerve by refusing to be sworn in before the traditional Islamic four-day period of her father’s mourning ends…writes Sheikh Qayoom 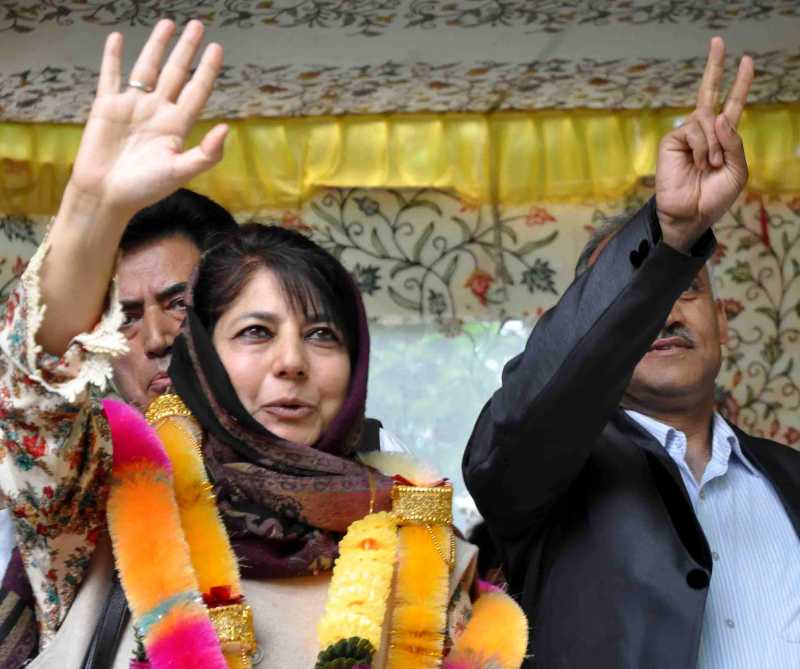 “Nobody can even remotely suggest to her that she break her mourning and be sworn in (as the Jammu and Kashmir chief minister). Suggesting that to a son would be easier, but Mehbooba Mufti has lost her father, ideal in life and best friend in Mufti sahib”, these words of a family friend suggests the 56-year-old Mehbooba is going to be a tough customer for both PDP cadres and allies in the days to come.

She is reputed to have pulled her father out of political hibernation in 1999 when the Peoples Democratic Party (PDP) was formed.
Even before that, Mehbooba Mufti had been a great emotional support for her father.

Mehbooba said in an exclusive interview in 2014: “In 1996, Mufti sahib was told by the Congress high command that if it could not field a candidate from our Bijbehara hometown for elections that would be a huge embarrassment.

“Militancy was at its peak and nobody was prepared to stick his neck out. I filed my papers and went out of the Valley. That is when my political baptism happened.”

Baptized in the fire of Kashmir’s violent times, Mehbooba Mufti has proved her nerve by refusing to be sworn in before the traditional Islamic four-day period of her father’s mourning ends.

Insiders said when BJP general secretary Ram Madhav met her Friday to express his condolences at the chief minister’s high security Gupkar Road residence, she politely told him she was in no frame of mind to discuss politics when the family was in mourning.

The state’s top bureaucrats, including the chief secretary and the principal secretary to the chief minister, were also told the same thing when they called on her Friday.

Family sources said she has been spending most of her time with her mother. “Tears well up each time somebody alludes to the times of her father.”

As constitutional experts keep arguing whether the absence of a government in Jammu and Kashmir is a constitutional crisis or not, for Mehbooba Mufti, politics comes much after the love and respect has for her father.

The decks already seem to have been cleared for her swearing-in by Monday or later next week.

Governor, N.N. Vohra has faxed letters to both the PDP and the BJP to “urgently” come forward with proposals about government formation in the state. This is legally the last ditch effort by Vohra to avoid imposition of a short spell of governor’s rule in the state.

Senior PDP leader and constitutional expert, Muzaffar Hussain Beigh said there is no constitutional crisis in the state as the death of the chief minister does not mean the breakdown of the administrative machinery.

“There is no constitutional crisis. We have a constitutional mechanism through which the state governor can run the affairs of governance through bureaucrats without appointing any advisors for the intervening period”, Beigh told reporters.

Reports also suggest the BJP state leadership is seeking a better bargain in the new political arrangement with the PDP once Mehbooba Mufti takes over the reins of governance.

Dismissing any give-or-take before Mehbooba Mufti takes over, Beigh said: “The rules of the game cannot be changed because Mufti sahib has passed away.”

Notwithstanding what senior party leaders like Beigh and others say about the political posturing by the two ruling alliance partners, those who know Mehbooba say she would not even discuss any climbing down from the terms agreed to by her father and the BJP high command.

“The large heartedness of Mufti sahib owed itself to his long years of experience and political grooming. Mehboobaji has always been unrelenting in her approach to politics.

“Remember, when Mufti sahib was away in the US in 2008, it was Mehbooba Mufti who took the hard decision to pull out of the alliance headed by Ghulam Nabi Azad,” said a senior minister in the government headed by Mufti Mohammad Sayeed.