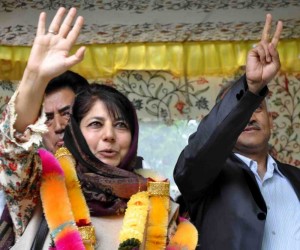 The PDP will contest the forthcoming Jammu and Kashmir assembly elections on its own, says party chief Mehbooba Mufti, while stressing the need of an improved “ground situation”, implementing suggestions for “self-rule” and understanding between the central and state governments for a political solution to the Kashmir issue.

Mufti said the Narendra Modi government could start working on recommendations of working groups on Kashmir to make a difference to the situation on the ground in the state.

She said her Jammu and Kashmir People’s Democratic Party (PDP) has so far not discussed alliances with anyone for the assembly elections slated for later this year but the party’s stance was nearly clear. “We have declared a large number of candidates. Only about 28 (in the 87-member assembly) are left. That almost says it,” Mufti told IANS in an interview here.

The term of the state assembly, which has a six year tenure, will come to end in January next year.

Asked about her party’s prospects, she noted it had led in 41 of 87 assembly segments during the Lok Sabha elections, where it won all the three seats in the Kashmir Valley.

“You need 44 seats to form government. We are hopeful (of forming the government) by working harder in Jammu region and maintaining our lead in the Kashmir region,” she said.

Mufti, who herself won from Anantnag, asserted “people want a change from misrule of National Conference-Congress government”.

She said there was no possibility of an alliance with the Bharatiya Janata Party (BJP) as “our ideologies were different”. “Two opposite forces should never join hands.”

To another query, she said that her father and former state chief minister Mufti Mohammad Sayeed will head the government if the PDP wins unless the party favoured some other candidate.

There was speculation about the Congress again joining hands with the PDP after party leader Ghulam Nabi Azad met her but Mufti denied the meeting had any political overtones, and said he only met her to congratulate on her election victory.

On the PDP’s role in Lok Sabha, she said it will not oppose the Modi government for sake of opposition and will not hesitate to criticise where needed.

About the Modi government’s Kashmir policy, she said it was too early to say but it had mentioned many times it wanted to follow policies of former prime minister Atal Bihari Vajpayee of winning hearts and minds of the state’s people.

On what could be the starting point, she said that it should start working on recommendations of the five working groups, set up by the Manmohan Singh government in 2006, on several issues including improving centre-state relations, furthering relations across the Line of Control (LoC), giving a boost to economic development and ensuring good governance.

“It will make huge difference on the ground,” she said, noting the recommendations, presently “gathering dust”, were “basically (contain) what we call self-rule”.

The 2008 self-rule document of PDP, a framework for resolution of Kashmir problem “without compromising the sovereignty of India and Pakistan”, has suggestions for political restructuring and economic integration of the two parts of Kashmir.

Its self-rule framework suggests creating regional council of greater Kashmir with representatives from Jammu and Kashmir and Pakistan administered Kashmir, economic integration across the LOC by “establishing a common economic space, instituting a dual currency system and synergising regulations”.

Calling for deepening economic integration by forming sub-regional groups, it seeks tariff reductions in “Greater Jammu and Kashmir” and later making it a “free trade area” which maintains its own external tariff on imports from the rest of the world.

Mufti said the PDP was “working hard” for the assembly elections and was reaching out to people with the work done in its earlier stint in government (2002-2008) including three years when Sayeed was chief minister.

On the return of Kashmiri Pandits, she said it was a human problem, stressing that “an atmosphere should be created that they feel secure. It is not possible by announcement”.

Mufti also asserted that the political process for solution to the Kashmir problem cannot be taken forward unless there is improvement in the ground situation.

“During our tenure, there was a change in the situation. Hurriyat Conference (moderate group) held talks with the NDA government,” she said.

“The political process should start from Kashmir and New Delhi should follow it…Both the central and state government have to be together,” she said.She said that the external dimension has also to be addressed “and that includes Pakistan”.

Mufti said that her party was in favour of opening up Kashmir, which could become India’s gateway to Central Asia.