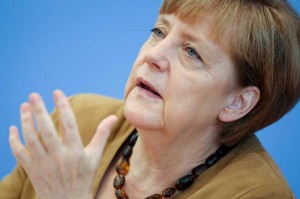 German Chancellor Angela Merkel Friday said the lost trust between Germany and the US due to allegations of spying activities could be rebuilt only by talks and agreements.

Speaking at a press conference, Merkel said the two countries should use conversation platforms such as US-German cyber dialogues to establish trust, Xinhua reported.

She stressed that the US is Germany’s most important ally despite their disagreements about security, data protection and the cooperation between intelligence services.

“The cooperation with the United States is of great importance for the security of Germany.”

She also noted Germany and the US have been keeping a very strong partnership based on shared values.

“It is important for the EU and the United States to continue to work closely on issues like the Ukraine crisis and nuclear negotiations with Iran as well as the conflict in the Middle East,” said Merkel.

The relationship between Germany and the US has been strained by last year’s revelations of US data gathering practices, especially allegations about the tapping of Merkel’s mobile phone.

Recent press reports that the US intelligence had recruited two Germans to work for them as informants have led to a new round of tensions in German-US relations.

The representative of US intelligence agencies in Germany left Berlin Thursday, complying with a request from the German government for him to leave as a consequence of the latest spying row that sparked anger in Germany.