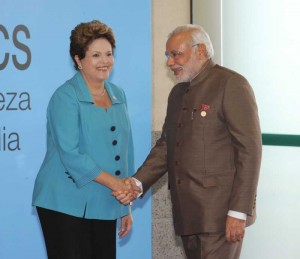 Indian Prime Minister Narendra Modi Tuesday called for “urgent reform” of institutions such as the UN Security Council and International Monetary Fund while stressing the international community should have zero tolerance towards terrorism.

In his statement in the BRICS summit on the agenda “Political Coordination: International Governance and Regional Crises”, he noted it was taking place at a time when the world was facing a high level of turmoil and uncertainty and “remaining mute spectators” to countries in peril could have “grave consequences”.

Modi, who addressed his first international meeting as prime minister, said collective pressure should be exerted on states to deny sanctuaries and support to terrorists even as he noted that terrorism had not been combated effectively due to “different yardsticks”.

The sixth meeting of BRICS – Brazil, Russia, India, China and South Africa – leaders is being held July 15-16 in Brazil.

Modi said that India looked forward to work with its BRICS partners on security and economic development of Afghanistan and said the grouping should explore how they can help end the conflict in Iraq.

He stressed BRICS must translate its political resolve into concrete and coordinated plan of action, and move towards advancing global peace and stability.

Restoring the climate of peace and stability was an urgent need for global progress and the world must unite to decisively confront challenges, he said.

“Corrective action must begin with the reform of institutions of global governance. This has been on the BRICS agenda since its inception. Institutions like the UN Security Council and IMF need urgent reform. They must become more representative and reflect ground realities,” he said.

Modi noted the region stretching from Afghanistan to Africa was experiencing turbulence and conflict, and causing grave instability that is fast seeping across borders.

“This impacts us all. Remaining mute spectators to countries being torn up in this manner can have grave consequences,” he said.

Noting Afghanistan was facing an uncertain future and its people have suffered for decades, Modi said the world must unite to help them build a peaceful, stable, democratic and prosperous country.

“We must help Afghanistan fight the forces of terrorism. This is important for it to preserve the progress it has made in the last decade,” he said, adding India will continue to assist it in capacity-building, governance, security and economic development.

On the situation in west Asia, he said it poses a grave threat to regional and global peace and security.

“India is particularly concerned because this affects the lives of seven million Indian citizens living in the Gulf region. We should explore how BRICS members can work together in helping end the conflict in Iraq,” he said.

He said the developments in Syria continue to cause serious concern and India has consistently called upon all sides to give up violence, while it was also concerned at the recent outbreak of violence between Israel and Palestine.

“For a comprehensive solution, there is no alternative to an inclusive political dialogue. A military, or externally imposed solution, will not work. India stands fully prepared to play a part in any peace process,” Modi said.

He said India also supports efforts to stabilize the situation in many African countries facing challenges of security and development.

Modi termed terrorism a a threat that has assumed war-like proportions and was in fact a proxy war aimed at innocent civilians.

“I firmly believe that terrorism, in any shape or form, is against humanity. There should be zero tolerance towards terrorism. Humanity must unite, and isolate terrorist forces, especially states that flout basic norms. Selective targeting of terrorism will not work,” he said, calling for an early adoption by the UN of the draft Comprehensive Convention on International Terrorism.

Noting cyberspace was a source of great opportunity but cyber security has become a major concern, he called on BRICS countries to take the lead in preserving cyberspace “as a global common good”.