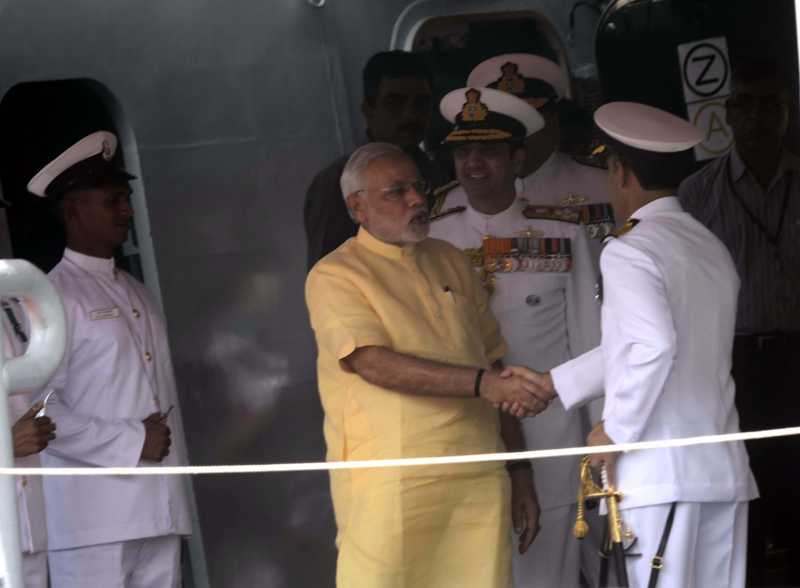 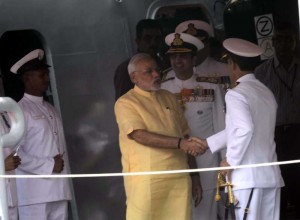 He also mingled with guests and posed for photographs at “At Home” hosted by air force chief Arup Raha to mark the Air Force Day. The event was also attended by cricket icon Sachin Tendulkar.

Modi talked at some length to Gen Singh, navy chief R.K. Dhowan and Doval at the event, which was also attended by senior serving and retired personnel from the Indian Air Force, ambassadors and military officials posted at diplomatic missions in the capital.

The army chief went to the podium to greet Modi and was seen talking to him beyond the customary greetings.

Modi, who was wearing kurta-pyjama and a half-jacket, appeared to be taking a briefing from the army chief ostensibly on the situation along the International Border and Line of Control in Jammu and Kashmir following successive ceasefire violations by Pakistan.

Doval, who met Modi minutes before his departure, also talked to him intently.

Modi was feted as he took a round in the lawns. He shook hands with men and women present, with some of them showering him with compliments for his “leadership”.

The reception hosted by IAF chief Raha also saw people thronging Tendulkar, who is an honorary group captain in the IAF. Tendulkar was accompanied by his wife Anjali.

Congress president Sonia Gandhi preferred to mingle with people near the podium for a large part of the evening and went on to it almost after Modi came down to meet the guests.

The two leaders are seeking a mandate for their parties in Maharashtra and Haryana and have been locked in a sharp debate.

The national anthem was played soon after arrival of President Pranab Mukherjee. Among those present on the stage were former prime minister Manmohan Singh and his wife Gursharan Kaur.

Modi interacted with Manmohan Singh and the two leaders also shared a laugh. He also greeted Sonia Gandhi before departing from the reception.

It was Modi’s first ‘At Home’ event hosted by a chief of the armed forces.