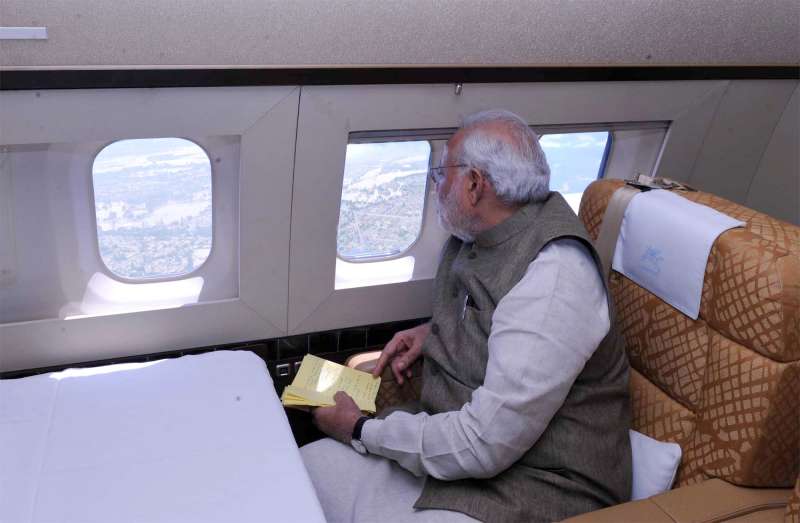 “It is a matter of great distress that the retreating monsoon rains have played havoc in many parts of our two countries,” Modi said in a letter to his Pakistani counterpart Nawaz Sharif.

Noting “the devastation caused by the record rains and the consequent flooding is unprecedented”, he said that “while reviewing the situation in Jammu and Kashmir, I was informed that the damage to life and property is equally, if not more, severe in areas across the Line of Control as well”.

“My heart goes out to the affected people and my deepest sympathies are with them and their families. In this hour of need, I offer any assistance that you may need in the relief efforts that will be undertaken by the government of Pakistan. Our resources are at your disposal wherever you need them,” he said.

Earlier, Modi, who had visited the state and made an aerial survey of affected areas, announced a special assistance of Rs. 1,000 crore.

Expressing anguish at the flood damage and loss of lives in neighbouring areas in Pakistan-administered Kashmir, he said India was ready to provide humanitarian assistance to the flood-affected areas if Pakistan requires it.

“In this hour of distress, the government of India is ready to provide humanitarian assistance to those areas if the Pakistan government needs it,” he said.

“The people of Pakistan are also feeling pain and saddened over the loss of lives and properties of the people in IoK (Indian Jammu and Kashmir) and are with them and ready to help in whatever way possible to mitigate their sufferings caused by the heavy floods,” the source said.

Heavy monsoon rains and flash floods have killed scores of people in Pakistan, as well as the part of Kashmir that is under Pakistan control. More than 100 people have died in floods and related incidents in Indian Jammu and Kashmir.

Relations between the two neighbours had soured of late after India called off the foreign secretary-level talks scheduled for Aug 25 over Pakistan envoy in India Abdul Basit holding talks with separatist Kashmiri leaders ahead of the official bilateral talks.

The foreign secretary-level talks were scheduled to be the precursor of the bilateral meeting between Modi and Sharif in New York later this month on the sidelines of the UN General Assembly meeting. The bilateral is now unlikely.