Prime Minister Narendra Modi on Monday paid tribute to those martyred in the 1919 Jallianwala Bagh massacre, saying ‘their valour will inspire Indians for the years to come’…reports Asian Lite News 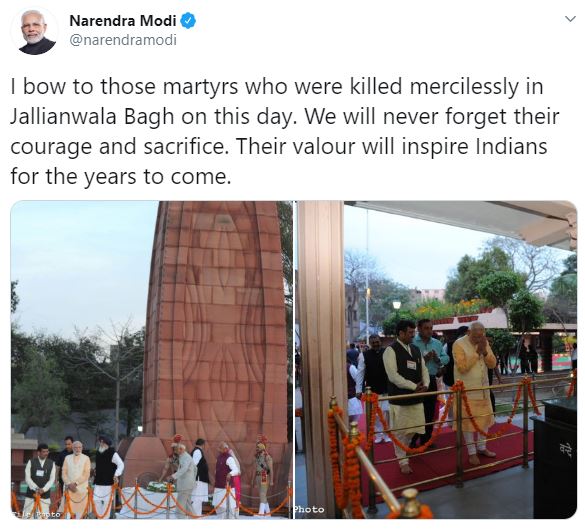 Taking to Twitter, the PM said : “I bow to those martyrs who were killed mercilessly in Jallianwala Bagh on this day. We will never forget their courage and sacrifice. Their valour will inspire Indians for the years to come.”

The Jallianwala Bagh massacre refers to the incident at the public garden in Amritsar on April 13, 1919, when General Dyer ordered British soldiers to fire at unarmed civilians, leading to the death of scores of people.

The crowd had gathered peacefully to protest against the arrest and deportation of two national leaders, Satyapal and Saifuddin Kitchle when Dyer and his troops entered the garden, and opened fire with machine guns, killing men, women and children. The youngest was a six weeks old baby.

The British government recorded 379 deaths and 1,200 injuries in the indiscriminated firing, while other sources record more than 1,000 casualties in the massacre.