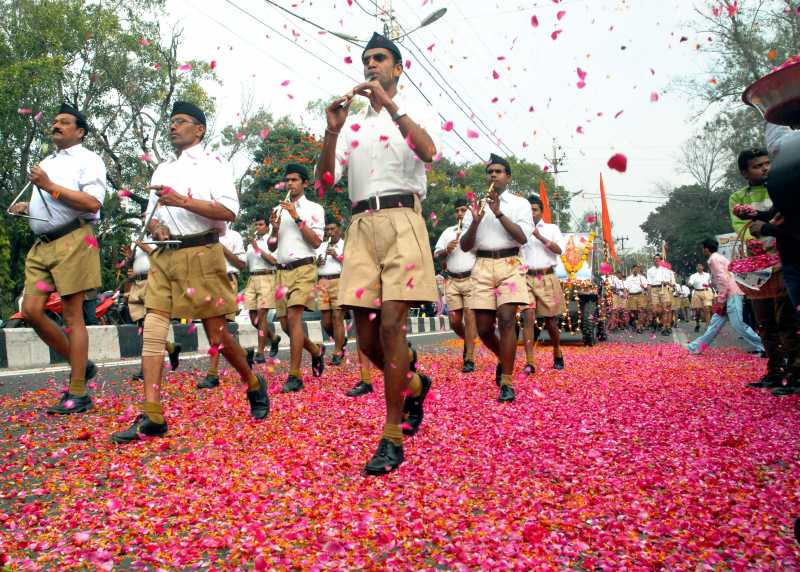 The Hindutva fundamentalists may be slowly realising that the Bharatiya Janata Party’s victory is unlikely to help their cause as much as they would have liked. For instance, any sense of elation which they felt when Narendra Modi said during the election campaign that the Bangladeshi infiltrators would have to pack their bags and leave on the day the results were announced must have dissipated by now.

It isn’t only the good neighbourly relations which New Delhi wants to establish with Dhaka which must have disheartened the saffron camp but also the suggestion for visa free entry for Bangladeshis below the age of 13 and above 65 years, which has been opposed by Assam Chief Minister Tarun Gogoi.

What these overtures emphasise is the primacy of development on Modi’s agenda, calling for eschewing any possibility of tension in the South Asian region. Since this may not be feasible where China and Pakistan are concerned, New Delhi is apparently keen to establish benign ties at least with Dhaka, ignoring the earlier imputations by the Rashtriya Swayamsevek Sangh (RSS)-led Sangh parivar that the illegal immigrants not only intended to tilt the demographic balance in India in favour of Muslims but also act as “sleeper cells” associated with terrorists.
What is evident from these turns of events is that development has aspects other than mere economic growth. It is not only a matter of roads and bridges – and bullet trains which seem to hold a special fascination for Modi – but also reducing all manner of controversies to the minimum since they may queer the pitch for investment.
The government’s exhortations, therefore, to its supporters to be careful in their comments on the social scene are in sync with its desire for a business-friendly environment. Any hint of misogyny, or an attempt at what has been called a psycho-analytic explanation for crimes against women, are to be avoided.
Hence the speed with which a Goa minister retracted his disapproval of women wearing short dresses in pubs or bikinis on the beach. A few days earlier, in the same state, a proposal to send a team of legislators to Brazil ostensibly to learn about the handling of World Cup matches was nipped in the bud.
The keen-eyed Modi government, which appears to keep a close tab on events far and near, is clearly aware that neither an egregious display of conservatism nor an uncalled-for trip at the tax-payers’ expense will enhance its image of purposefulness.
It is aware that an economic programme, which highlights the capitalistic agenda represented by glittering malls and multiplexes, cannot be implemented in an atmosphere where women have to be careful of not offending ultra-orthodox sentiments.
This very point was stressed by former finance minister P. Chidambaram in the context of the Shiv Sena’s Maratha chauvinism and the Congress-led Maharashtra government’s ban on bar girls in Mumbai. His view was that a city aspiring to be the financial capital of India cannot allow “parochial and jingoistic statements and misconceived intentions that belong to moral policing”.
As is known, despite the caution, the Prithviraj Chavan government is bent on banning dance bars in Mumbai evidently to please the conservative sections of the population. But by openly disapproving of such sections in the saffron ranks, the Modi government has shown an assertiveness which is not common among the Indian politicians who tend to take the line of least resistance, especially where conservative sensibilities are concerned.
However, by sidelining some of the key preferences of the Hindutva camp on matters of religion such as the Ram temple, or on the social scene such as women’s dresses, the government has underlined its wish to follow a new course, which is markedly different from what used to characterise the BJP and the RSS in the 1990s when the traditionalists held sway.
Among their priorities at the time was to rewrite history books to bring them in line with the saffron worldview or rail against the Christian missionaries or call for a ban on cow slaughter. But none of these issues seem to be of interest to the new government, whose primary objective is on containing price rise and reviving the economy.
There is little doubt that the present scene will be disappointing for any group in the Sangh parivar which believes that there will be a return to the ’90s as when Ashok Singhal of the Vishwa Hindu Parishad (VHP) said that only Modi can save India from “total Islamisation”.
Modi can be said, therefore, to have prevailed against the traditionalists. His trump card is economic revival. If the growth rates go up and there is hope that the employment situation will improve, his acceptability will be even wider than at present even if his “bitter medicines” in the shape of extracting user charges from the public are criticised by his political opponents. But outside the field of economics, Modi’s main achievement may well be the taming of the saffron extremists.