According to Ministry of External Affairs, after being warmly welcomed by Xi on his arrival at Hubei Provincial Museum, the two leaders had a one-on-one meeting “during which they exchanged views on solidifying our bilateral relationship.” Modi invited Chinese President Xi Jinping to India for an informal summit in 2019….reports Gaurav Sharma from Beijing

Indian Prime Minister Narendra Modi and Chinese President Xi Jinping on Friday discussed ways to cement their bilateral relationship as they opened a two-day informal “one of its kind” summit in the central Chinese city of Wuhan.

After being warmly welcomed by Xi on his arrival at Hubei Provincial Museum, the two leaders had a one-on-one meeting “during which they exchanged views on solidifying our bilateral relationship”, the Indian External Affairs Ministry said.

“The Prime Minister was welcomed at the museum with an impressive cultural performance,” Ministry spokesperson Raveesh Kumar tweeted.

“India and China cultural connect go back many centuries and is reflected in present times through the popularity of Bollywood, yoga and other aspects of Indian culture.”

He said Xi took Modi on a tour of the exhibition of Marquis Yi of Zeng Cultural Relics and Treasure at the Hubei Provincial Museum.

Modi arrived at the museum at around 3.30 p.m. and warmly shook Xi’s hand for 30 seconds. Both leaders then took a tour of the site for around an hour.

They saw an exhibition of fine relics from the Chinese civilization — with special focus on the culture of Hubei.

Modi and Xi also exchanged views on the relationship and communications between the two ancient civilizations of China and India. 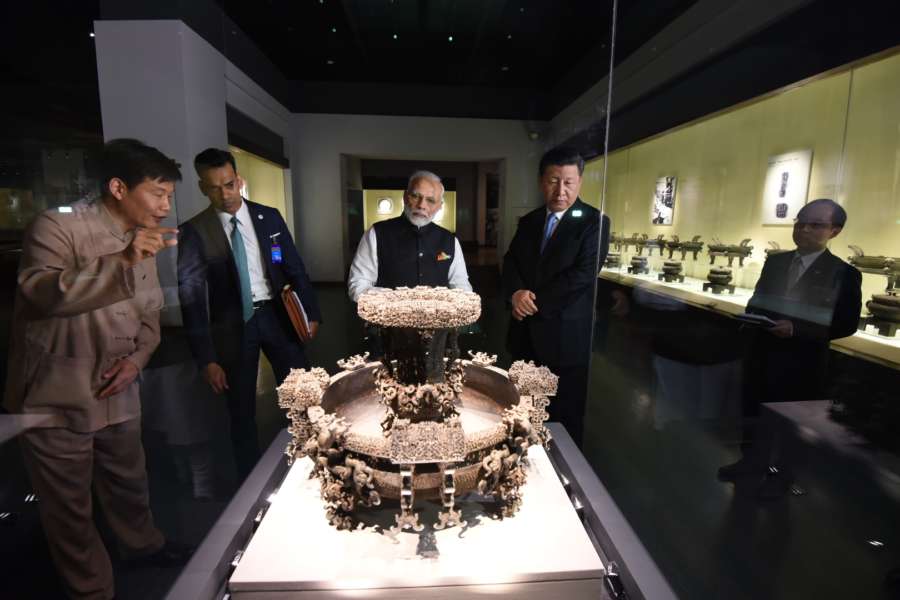 They will hold another meeting at 6 p.m. with delegations from both sides being present. This will be followed by a dinner hosted by the Chinese President.

The talks between the two leaders will be more substantive on Saturday with a walk by the East Lake, a boat ride and discussion at the East Lake guesthouse, which was once Mao Zedong’s private villa.

India and China, who fought a brief war in 1962 and have a history of mutual distrust, nearly came to an armed conflict near their border in 2017, taking their ties to a new low.

However, the rendezvous between Modi and Xi at the heart of China was a sign enough that the two countries were willing for a new start in their tense relationship.

The meeting was an offshoot of Xi-Modi discussions just after the resolution of the Doklam crisis on the sidelines of BRICS Summit at Xiamen in China.

“It is an important meeting between both the leaders. Development is the most important topic for the leaders of these two countries,” Long Xingchun, Director of the Centre for Indian Studies at China West Normal University, said.

“India can achieve its goal and become a global power in the world with the help of China. China is rich and stronger than India but we also have so many domestic problems to deal with.

“The two countries need to prioritize development. Now, America’s protectionist policy is not a good news for India and China,” Long said.

Modi invited Chinese President Xi Jinping to India for an informal summit in 2019.

As Modi opened talks with Xi on the first day of a two-day informal summit, the Indian leader said more such meetings were needed and invited Xi to India next year.

“I am grateful for your invite and the welcome extended by you. This is perhaps the first time when you have received an Indian Prime Minister twice away from Beijing,” Modi said. “This is a matter of pride for India as you yourself came to Wuhan to welcome me.

“You rightly pointed out that leaders of the two countries which represent 40 percent of the world’s population are meeting.

“This is just not an informal summit of two leaders but it has a historical context too.”

“You invited me to informal talks and created a positive environment. This has your personal contribution to this meet.

“In the history of 2,000 years, the economies of India and China were the anchors of the world economy for 1,600 years.

“In these 1,600 years, Indian and Chinese economies together accounted for the 50 percent of the world’s economy.”