An official statement said, “During the e-inauguration of these projects, the Lieutenant Governor observed that with the commissioning of new projects sanctioned, the power curtailment in Kashmir would be reduced by 6-8 hours during winter season.”

“Pertinently, during winter season, there used to be 12-16 hours of power curtailment in some parts of Kashmir Division. The commissioning of 12 receiving stations is a great leap forward to improve the capacity constraints from distribution side,” it added.

Murmu said that the government of J&K is aiming to achieve the larger goal of self-sufficiency in power sector and stressed on concerted efforts towards achieving medium term target of providing reliable power supply to the consumers with no more than 2 hours of power curtailment.

“During the last two years, J&K has witnessed rapid progress in execution and completion of major developmental projects. The projects under PMDP were sanctioned in 2015. However, the work on most of these projects started in the years 2018 and 2019 only, and within a short span of time, these projects are being commissioned,” it said.

The Lieutenant Governor set November 2020 as the deadline for the completion of the 7 projects whose foundation stones were laid. He also advanced the completion target for two power projects from December 2021 to May 2021.

The Indian Railways is hopeful it will complete the Udhampur-Srinagar-Baramulla rail link by December 2022 and the central government is closely monitoring its progress, Railway Board Chairman V.K. Yadav said.

Addressing a virtual press conference, Yadav said, “Execution of the last stretch of 111 kms from Katra to Banihal is in progress and the project is targeted to be completed by December 2022.” The Chairman stressed that the balance section of the project is one of the most challenging tasks as it entails large scale tunneling and bridge works.

Yadav said that out of the 163 kms of tunnels in the project the national transporter has completed tunneling work of over 126 kms. Similarly, he said, the railways has completed the construction of over 20 out of 37 bridges. It has taken up the task to build one of the highest bridges on river Chenab on this route with a height of over 359 meters and 1.3 km long. The bridge is an engineering marvel and it will soon connect most remote parts of the country in Jammu & Kashmir with mainland India.

The bridge is being built on the Katra-Banihal railway line at village Kauri in the Reasi district. According to officials the bridge will be 359 meters above the Chenab river bed and will also be 30 meters higher than the iconic Eiffel Tower in Paris, France. The bridge has been designed to withstand wind speeds of up to 260 kmph and its lifespan will be 120 years.

According to the railway ministry officials, it is the seventh-largest arch-shaped bridge in the world as there is no support except on both sides of the river banks, one of the supporting RCC and steel pillar is 133 meters high. The arch is being supported by piers and trusses. The officials said that the Chenab bridge has been designed by consultants from Finland and Germany and the work is being executed by the Konkan Railways.

The concrete pillars of the bridge have been designed to withstand explosions, it will include a 1.2 metre-wide central verge and a 14 metre-wide dual carriageway. The Chairman said that out of the 37 bridges in this route, the national transporter has completed 20 bridges while the work on 17 is underway. 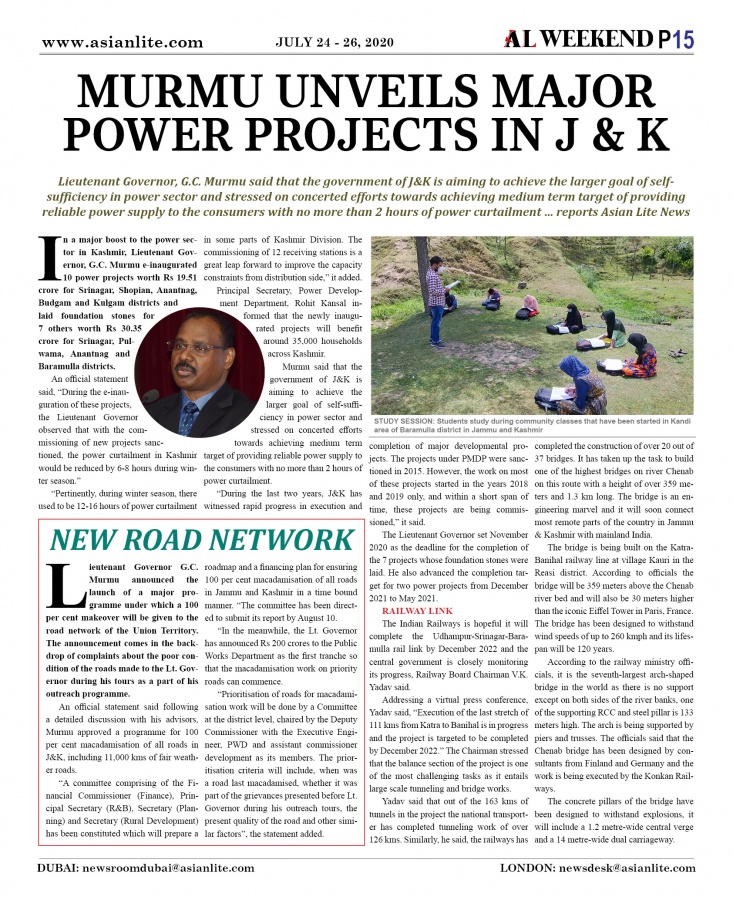 The Chairman further said that the work on the Anji Khad bridge in Jammu & Kashmir, which is 331 meter highg, the work is in progress. According to railway ministry officials, Anji bridge is the country’s “first cable-stayed” Indian Railways bridge – and it will connect Katra and Reasi. The total length of the Anji Khad Bridge is 473.25 metres. The length of the viaduct is 120 metres and the central embankment has a length of 94.25 metres. It has support of 96 cables.

The Anji Khad Bridge has been designed to handle heavy storms of strong winds. Pointing out at the reasons for the delay in the project, the Chairman asserted that most of the sites in the project are inaccessible and fall in the very difficult geology of young Himalayan mountains. He also said that the repeated Public Interest Litigations in High Court also affected the project adversely from 2008 to 2016.

Yadav also cited the law and order issue and extreme weather condition as the project lies in the rainfall and snowfall prone areas also led to the delay in the project. Meanwhile, the Chairman said that despite the Covid-19 pandemic works in the last stretch are in progress and the central government is closely monitoring the project for its timely completion.