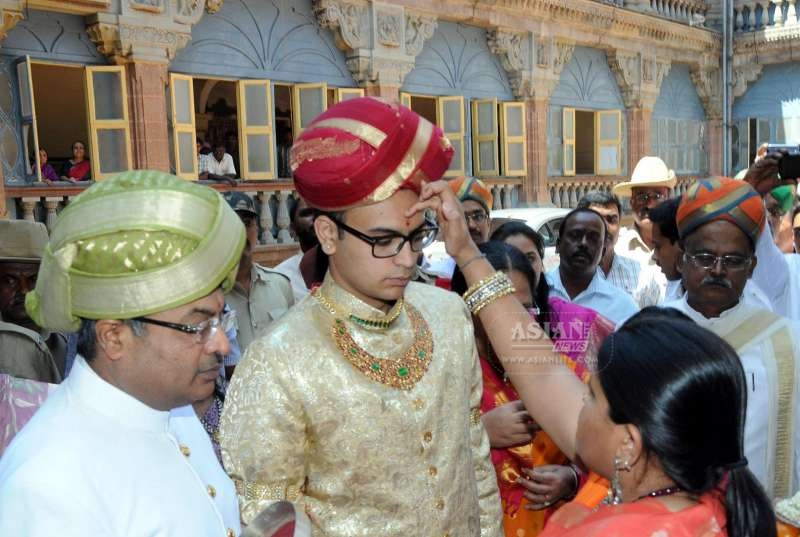 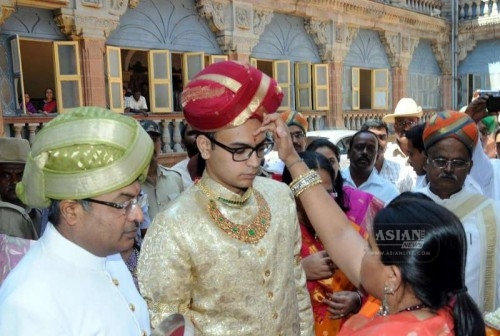 “The adoption ceremony took place at the auspicious moment (1.15 p.m.) in the spruced up Amba Vilas Palace amid chanting of Vedic hymns and prayers,” a member of the erstwhile royal family said here, about 150 km from Bengaluru.

Pramoda Devi, widow of Srikantadatta Narasimharaja Wodeyar, adopted Yaduveer in the presence of royal family members and about 1,000 guests specially invited for the grand occasion in this city of palaces.

“Soon after adoption, the new scion was rechristened Yaduveer Krishnadatta Chamaraja Wodeyar to ascend the throne after coronation before the grand Dasara fest in October,” the member said.

The scion, who is pursuing a degree course in English and Economics at Boston, US, wore a golden-coloured bandgala and sported a reddish royal headgear with a diamond necklace for the ceremony.

“As Srikantadatta and Pramoda Devi have no children, they are adopting Yaduveer to be the new scion,” the royal family member said.

The Wodeyar dynasty ruled the Mysuru kingdom for over seven centuries from 1399 to 1950.

The adoption rituals were conducted by Indrakshi Devi, younger sister of Srikantadatta, and monitored by Pramoda Devi under the guidance of palace priests, led by Parakala mutt seer Abhinava Vageesha Brahmatantra Swatantra in the octagonal glass-topped kalyana mantap (sanctum sanctorum).

Yaduveer sat with his parents on a raised wooden platform on one side, while Pramoda Devi and the royal family members on the other side for the ceremony.

Sprinkling holy water on Yaduveer, Pramoda Devi sought consent of his parents for adoption and placed him on her lap to whisper his new name three times.

The ex-maharaja of Sirohi in Rajasthan and the ex-maharaja of Dungarpur in Gujarat, Karnataka Home Minister K.J. George and Housing Minister M.H. Ambareesh were among the special invitees for the royal occasion.

Hundreds of tourists, including foreigners visiting the palace, also witnessed the ceremony from outside, as entry was prohibited.

The special guests and invitees were served a sumptuous lunch.

Later, the new prince was taken around the illuminated palace premises in a silver chariot to greet the people.