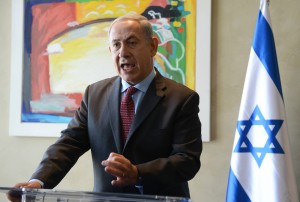 urged the P5+1 countries not to surrender to Iran ahead of a deadline for a permanent nuclear deal, media reported Monday.

Netanyahu Sunday said in a statement that Iran should be stripped of its uranium enrichment capacities, Xinhua reported.

According to the statement, Netanyahu said that Iran is “interested in obtaining a surrender agreement from the West”, and that Iran should not get this desired agreement.

The West has demanded that Iran dramatically lower its uranium enrichment capacity to only a few hundred centrifuges.

In return Iran has urged for a complete removal of Western sanctions that have been hurting its economy.

Such a desired agreement should include “the dismantling and removal of its uranium enrichment capabilities, in contrast to the apparent agreement with Iran which leaves capabilities under supervision”, Netanyahu said.

The negotiations between the P5+1 or the five permanent members of the UN Security Council – the US, China, Russia, France, Britain plus Germany, and Iran are about to progress into their final stages, as both sides are set to resume talks Wednesday and work to reach a permanent agreement over Iran’s nuclear program by July 20.

Earlier Sunday, Israel sent a delegation to the US, headed by Intelligence Minister Yuval Steinitz, to discuss the upcoming talks with Iran.

Netanyahu and other Israeli officials have repeatedly said that Iran poses a threat to the existence of Israel and the well-being of the world.

But Iran insists that they are developing nuclear capabilities for peaceful purposes.