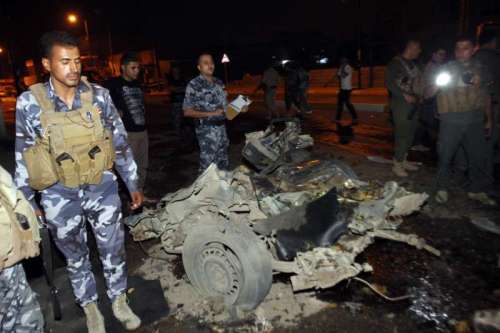 Over 100 people were killed and 79 others wounded in Iraq Thursday in US air strikes and clashes between the Iraqi security forces and insurgent militants, including those with the Islamic State(IS), officials and security sources said.

“Some of the dead and wounded were recruits who joined the militant group coming from several Arab countries, and were receiving basic military training at the site,” the official told Xinhua citing intelligence reports.

More air strikes were carried out by US aircraft against IS militants in Nineveh province, but there were no immediate reports about casualties, the official said.

In Iraq’s Salahudin province, dozens of IS militants, who have captured part of the town of Dhuluiyah, some 90 km north of Baghdad, carried out a pre-dawn attack from three directions on the southern part of the town which is under control of the Sunni tribe of Jubour, the town’s police chief told Xinhua.

Iraqi security forces, backed by allied Jubour tribesmen, engaged in four hours of clashes with the attackers, leaving 23 militants dead and five others wounded, while a soldier was killed and four tribesmen wounded, the police chief said.

Jubour tribesmen and local police have been fighting the IS militants for more than two months, and repelled many attacks by the extremist group that once seized the town but was driven out.

In the country’s eastern province of Diyala, the security forces backed by Shia militias, killed two local IS leaders and 20 militants in clashes in the villages of Shirween and Sansal near the town of Mansouriyah, some 100 km northeast of Baghdad, the provincial police chief told Xinhua by telephone.

The security situation in Iraq began to deteriorate drastically after June 10, when bloody clashes broke out between Iraqi security forces and hundreds of IS militants. The militants have taken control of the country’s northern city of Mosul and seized swathes of territories after the Iraqi security forces abandoned their posts in Nineveh and other Sunni-predominant provinces.