Protestors in this Pakistan capital Monday moved beyond the Secretariat area and headed towards the Prime Minister’s House. 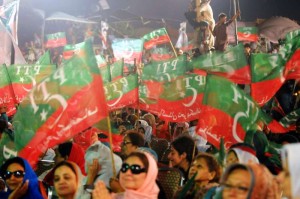 At least five people were injured as the police fired tear gas, rubber bullets and resorted to baton-charge to prevent the protestors from moving any further, ARY News reported.A large number of Pakistan Tehreek-e-Insaf (PTI) and Pakistan Awami Tehreek (PAT) supporters gathered outside the Secretariat gate.According to officials, a protestor facing police resistance, set ablaze a container placed on way to the Prime Minister House.After being hit with shells and rubber bullets, the protestors also pelted the police with stones. Announcements from loud speakers also warned the police against using force against protestors.PAT leader Tahirul Qadri has also begun moving towards the Pakistan Secretariat in a vehicle.The protests led by PTI chief Imran Khan and Qadri began Aug 15 in an attempt to topple Prime Minister Nawaz Sharif who is accused of rigging the 2013 general elections.The protests turned violent late Saturday and Sunday and as a result, at least eight people were reportedly killed with over 450 protesters injured.