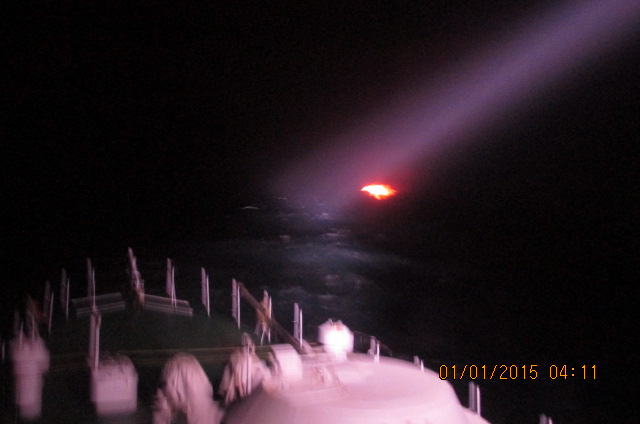 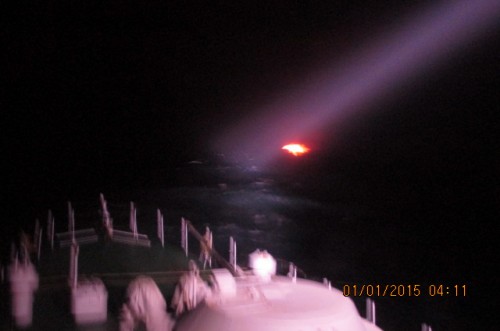 A suspicious Pakistani fishing boat exploded into a ball of fire off the Gujarat coast and sank after it was intercepted by the Coast Guard, the government said .

The dramatic incident took place on the night of Dec 31-Jan 1, and the Coast Guard’s Deputy Director General K.R. Nautiyal said he suspected “something serious”.

He told the media that the boat first tried to get away after a Coast Guard ship asked it to halt for a check of its crew and goods. After six hours, it switched off its lights early Thursday just inside the Indian waters.

The crew members, four of whom were spotted, then went to the deck below. It then blew up, indicating it may have been carrying explosives.

A defence ministry statement said the Pakistani boat, which had set off from near Karachi, Pakistan’s southern port city, was planning “some illicit transaction”. Its destination was unknown.

The Coast Guard and the navy got into the act following an intelligence tip about a suspicious Pakistani boast.

The boat was spotted by a Dornier aircraft and intercepted by Coast Guard ships near the India-Pakistan maritime boundary, 365 km from Porbandar in Gujarat, shortly before the onset of New Year.

A Coast Guard ship warned the boat to stop for investigation but it increased speed and tried to get away.

“(A) hot pursuit continued for nearly one hour, and the Coast Guard ship managed to stop the fishing boat after firing warning shots,” the statement said.

“Four persons were seen on the boat who disregarded all warnings by the Coast Guard ship to stop and cooperate with investigation.”

The suspicious crew then hid themselves below the deck and set the vessel on fire, resulting in an explosion and a major fire.

“Due to darkness, bad weather and strong winds, the boat and persons on board could not be saved or recovered. The boat burnt and sank in the same position in early hours of Jan 1,” the statement said.

The Coast Guard’s Nautiyal said the boat sank at 6.33 a.m. after being cornered in the sea.

“There must be something serious,” he said. “Otherwise there was no reason to try to escape… or to switch off the lights.”

When the boat exploded and sank, an Indian Dornier was in the air.

Nautiyal called the incident the outcome of “good coordination between the intelligence and forces”.

According to military officials, vigil has been increased along India’s maritime boundaries for the last two months due to several inputs on possible threats from the sea.

The Indian Navy chief has last month warned of increased threats from the sea.