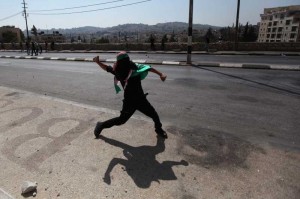 Several Palestinians were injured and one was arrested  in clashes with Israeli soldiers in the West Bank city of Nablus, Palestinian security sources told the local Maan news agency.

Thirty five Israeli military vehicles entered Palestinian territory to escort a group of about 300 Jewish pilgrims who came to pray at the funerary monument, Joseph’s Tomb, the sources added.

Palestinian youths threw stones, bottles, petrol bombs and other objects at the convoy of buses and armoured vehicles.

During the fighting, a Palestinian boy of 16 was arrested.

Joseph’s Tomb, which is next to Balata refugee camp, has been venerated for centuries by Christians, Jews and Muslims alike.

According to the Oslo Accords of 1993, the area is under the control of the Palestinian National Authority, although in practice it is controlled by the Israeli army which prevents Muslims from praying inside.