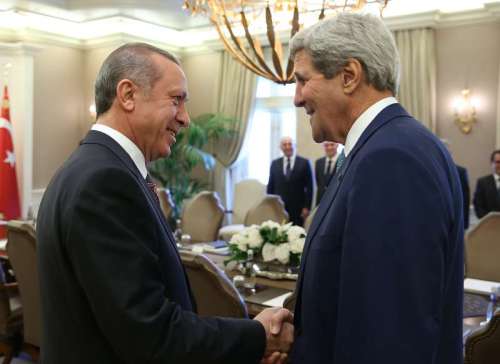 Representatives of 29 countries, including the five member of the UN Security Council, agreed Monday to provide Iraqi authorities with “any means necessary including military assistance” to help in cracking down on the Islamic State (IS) terrorist group, France’s foreign ministry said.

“All participants underscored the urgent need to remove Daesh (or IS) from the regions in which it has established itself in Iraq. To that end, they committed to supporting the new Iraqi Government in its fight against Daesh,” said a final communique issued after the conference.

However, Western and Arab officials did not elaborate on what would be the envisaged military support.

France has already said that it would join US airstrikes against IS militants in Iraq with French aircraft beginning reconnaissance flights over Iraq Monday from a French base in Abu Dhabi where Paris has six Rafale fighters jets.

The Paris conference on the security and peace in Iraq rang the alarm bell of the growing and global threat of IS. Representatives at the conference vowed strong cooperation “to do everything to ensure that the culprits are brought to justice”, Xinhua reported.

Furthermore, they will “ensure today’s commitments are implemented and followed up on”, notably in the framework of the UN and during the high-level meetings that will be held alongside the UN General Assembly, according to the statement.

With a month-long IS offensive in Iraq and Syria shaking the region’s stability and forcing millions of civilians mainly from minorities to flee the conflict, participants pledged an action plan to combat terrorist financing and measures aimed at preventing radicalization of people and to better monitor borders.

Expressing their support to the newly-appointed Iraqi government, top diplomats from Europe and Gulf region expressed their commitment to preserve Iraq’s territorial integrity and sovereignty, urging officials in Baghdad “to strengthen the rule of law, implement a policy of inclusiveness, and ensure that all components are fairly represented… in order to successfully combat Daesh (ISIL) and terrorist groups”.

Earlier Monday, French President François Hollande said that the fight against the IS required a global response which must come from the Iraqis themselves, while demanding the unity and support of the international community.

At the opening of the conference, the French president said that “there is no time to lose” to a greater threat “to Iraq, the Middle East and the rest of world”, Efe news agency reported.

Hollande said the answer must be first humanitarian and then political, and this should include looking for a lasting solution in Syria, “in the place where the organisation was born”.

“The fight of the Iraqis against terrorism is our fight as well,” he said, calling for a “clear, loyal and strong” engagement in the country alongside the Iraqi government.

“We must support those who can negotiate and make the necessary compromises for the future of Syria,” he said.

For France, those were the forces of the democratic opposition in Syria fighting President Bashar al-Assad’s regime, Hollande added.

The murder of British aid worker David Haines, according to Hollande, was the latest demonstration of the danger the IS poses to the world.

It is a group “that seeks to found a state” and has “committed massacres and abuses against the civilian population”, Hollande told the conference.

Iraqi President Fuad Masum, who co-chaired the Paris conference, said that the activities of IS fighters emphasised the need to overcome “common strategic thinking of Al Qaeda” and needs “greater efforts” to prevent them from becoming sanctuaries and to cut their funding sources, the Efe report said.

“This is a big problem that affects not only Iraq, but is going to spread to other parts of the world. Many jihadis come from Europe, and on their return they will be sleeper cells,” he said in an interview with French radio station Europe 1.