Protesters Monday took over the Pakistan Television (PTV) network office here, as a result of which transmission has disrupted in Islamabad.The protesters, who seemed to have faced no security obstacles, also barged into PTV’s control room, Dawn online reported.However, Pakistan Tehreek-i-Insaf (PTI) leader Imran Khan said PTI protesters had not broken into the PTV building, and added that if PTI protesters were discovered inside, they would be kicked out from the party.“I appeal to the protesters to refrain from any harmful activity within the area and also refrain from acts that would defame the party,” Imran Khan said.Army troops have reached the PTV office and are beginning to secure the building.Earlier, Imran Khan congratulated the protesters for holding protests for the past 17 days and directed them to remain peaceful to avoid any violent clashes. 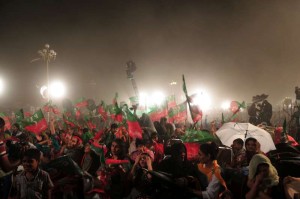 Imran Khan also asked Pakistan Awami Tehreek (PAT) chief Tahirul Qadri to direct his protesters to remain peaceful and non-violent.Protesters in Islamabad moved beyond the Secretariat area and headed towards the Prime Minister’s House.At least five people were injured as police fired tear-gas, rubber bullets and resorted to baton-charge to prevent the protesters from moving any further.According to officials, a protester facing police resistance set ablaze a container placed on way to the Prime Minister’s House.After being hit with shells and rubber bullets, the protesters also pelted the police with stones. Announcements from loudspeakers also warned the police against using force against demonstrators.The protests led by PTI chief Imran Khan and Qadri began Aug 15 in an attempt to topple Prime Minister Nawaz Sharif, who is accused of rigging the 2013 general elections.The protests turned violent late Saturday and Sunday and as a result, at least eight people were reportedly killed with over 450 protesters injured.