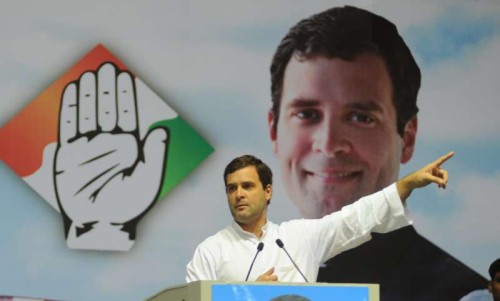 Congress vice president Rahul Gandhi Thursday took a jibe at Prime Minister Narendra Modi, saying he was playing the drums in Japan while people in the country were battling power cuts, price rise and lack of roads and water supply.

“The prime minister is playing the drums in Japan while there is no electricity here. There are no roads and there is no water,” said Gandhi, who is currently on a two-day visit to his constituency Amethi in Uttar Pradesh.

The Bharatiya Janata Party made tall promises in the run-up to the general elections but there is no action on the ground after it came to power, he claimed.

“Vegetables are more expensive today than they were. There is a serious electricity problem and no action has been taken on corruption. So, where is the result?” Gandhi asked, contending the BJP-led National Democratic Alliance’s first 100 days in power were a failure.

The Congress vice president alleged that the BJP leaders are high on speeches, but low on delivery.

“Big speeches are happening, but the efforts to fulfill election promises have not yet begun,” he said, adding the common man too was realising that the BJP is not sincere about fulfilling those promises.

Gandhi said he has written a letter to Uttar Pradesh Chief Minister Akhilesh Yadav, seeking his intervention in power cuts in Amethi