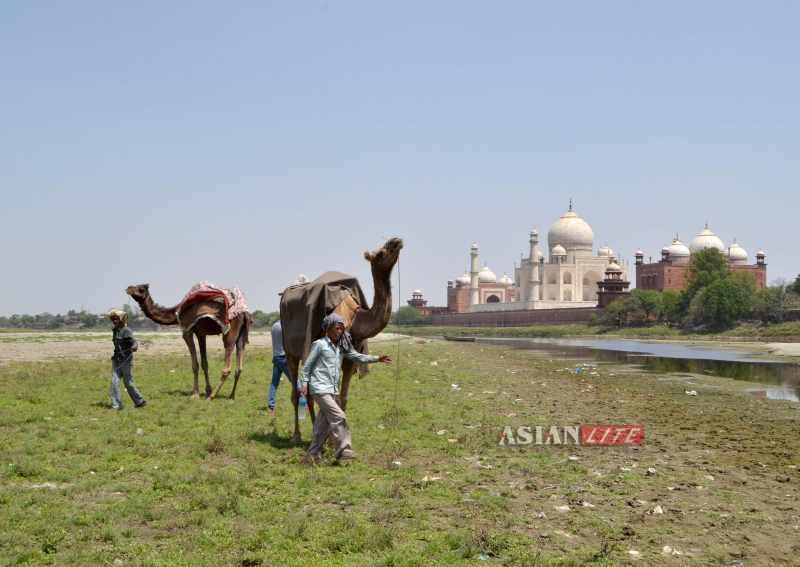 The problems of the Yamuna and other Indian rivers will again be in focus on the the annual World Rivers Day as the people of Braj Mandal join millions around the world in the 10th edition of the observance on Sunday. Activists in Agra, Mathura and Vrindavan will be celebrating the day with group discussions, visits to the river and rallies.

“At the silver jubilee celebrations of the Agra Hotels Association on September 28, we will highlight the plight of the Yamuna river and the threats a dry river poses to the safety of the Taj Mahal,” Braj Mandal Heritage Conservation Society president Surendra Sharma said.
He is not off the mark. Even before the monsoon officially withdraws, the Yamuna is already dry in the Taj city, which is facing an acute water crisis.
“This time last year the river was in spate. Due to poor management and lack of storage capacity, all the rain water has gone down. Behind the Taj Mahal, islands have appeared. The Agra Water Works two weeks ago started complaining of raw water shortage,” said ecological activist Anand Rai.
In Mathura, Yamuna activists have started mobilising support for their November 2 march to Delhi to demand action on a Yamuna plan, although Uma Bharti, the union minister for water resources had some days ago in Mathura promised drastic measures to contain pollution in the river.
And, with many of the world’s rivers facing severe and increasing threats associated with climate change, pollution, and industrial development, more than 70 countries are participating in this year’s World Rivers Day festivities.
Many events around the world will focus on educational and public awareness activities while others will include river and stream cleanups, habitat restoration projects and community riverside celebrations. World Rivers Day strives to increase public awareness of the importance of our waterways as well as the many threats confronting them.
“Rivers are integral to all life. Yet, many waterways continue to face an array of threats and are often impacted by inappropriate practices and inadequate protection”, says Mark Angelo, World Rivers Day chair and founder and chair emeritus of the Rivers Institute at the British Columbia Institute of Technology.
Endorsed in its inaugural year by the Tokyo-based United Nations University and its International Network of Water, Environment, and Health, and with HSBC Canada as its lead sponsor, World Rivers Day events will include activities in countries ranging from Canada to England, Australia to the United States, Poland to South Africa, Malaysia to Bangladesh, and across most of the major rivers of Europe.
“Millions of people, dozens of countries, and numerous international organizations will be contributing to World Rivers Day,” says Angelo. “It provides a great opportunity for people to get out and enjoy our waterways. At the same time, the event strives to create a greater awareness of the urgent need to better care for our rivers and streams.”