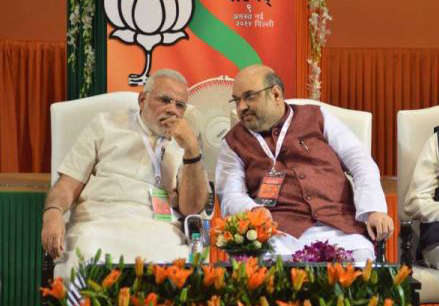 Ahead of next year’s general elections, a united opposition got a major boost on Thursday when it delivered a huge blow to the BJP, defeating it in the Kairana Lok Sabha by-election in Uttar Pradesh and Bhandara-Gondiya in Maharashtra while the saffron party managed to retain the Palghar parliamentary seat and win only one out of the 10 Assembly seats in 10 states….reports Asian Lite News

The biggest shock for the BJP came from Kairana — a seat the BJP won in 2014 — where the opposition had put up a common candidate.

Ajit Singh’s Rashtriya Lok Dal (RLD) candidate Tabassum Hasan, supported by the Congress, the SP and the BSP, trounced the BJP’s Mriganka Singh in Kairana in Uttar Pradesh by over 55,000 votes.

The BJP along with its allies had swept 73 out of the 80 Lok Sabha seats in Uttar Pradesh in the 2014 general elections and won an overwhelming 312 seats out of a total 423 in the state assembly elections last year.

Along with the Kairana reverse, the BJP also suffered the ignominy of losing the Noorpur Assembly seat to the Samajwadi Party in the by election in Uttar Pradesh. Samajwadi candidate Naimul Hassan defeated BJP’s Avani Singh by over 6,200 votes.

The Kairana defeat for the BJP comes on top of the failure to retain Gorakhpur and Phulpur in the by-elections in March this year in which the Samajwadi candidates, with the backing of BSP, had defeated BJP candidates.

In Palghar Lok Sabha seat in Maharashtra, the Bharatiya Janata Party (BJP) win came in a triangular fight in which the candidate of its sulking ally, the Shiv Sena, cornered a considerable chunk of votes. BJP’s Rajendra Gavit defeated Shiv Sena’s Srinivas Wanga by over 29,500 votes.

However, the BJP candidate Hemant Patel had to bite the dust in the Bhandara-Gondiya seat in the state with the NCP’s Madhukar Kukde snatching the constituency that was won by the BJP in the 2014 poll. The Congress supported the NCP candidate in the current by poll. Kukde defeated Patel by over 45,000 votes.

RLD leader Jayant Chaudhary hoped that the combined opposition would keep its momentum to defeat the BJP in the Lok Sabha elections next year. “I am confident that the RLD will play a role in how to carry forward the opposition unity and alliance. Whatever the alliance, we will play a positive role,” he told reporters.

Of the 10 assembly seats where by-polls were held last Thursday, the BJP scored just one in Uttarakhand while the Congress won Punjab’s Shahkot, Karnataka’s RR Nagar and Meghalaya’s Ampati that made it the single largest party in the northeastern state.

The Trinamool Congress won the Maheshtala seat in West Bengal while the CPI-M candidate defeated a Congress rival in Kerala’s Chengannur.

Jailed politician Lalu Prasad’s RJD defeated the ruling BJP and JD-U’s joint candidate in Bihar’s Jokihat assembly seat where it was more of a battle of prestige for the former allies – the RJD and the JD-U. RJD’s Shahnawaz Alam beat a JD-U candidate by over 41,000 votes.

Lalu Prasad’s son Tejashwi Yadav, a former Deputy Chief Minister, said the loss was a lesson for Chief Minister Nitish Kumar who broke away from the anti-BJP grand alliance and joined hands with the BJP in Bihar.

“Want to thank all the opposition parties for coming together against the BJP… This loss proves that Nitish Kumar has deceived the people of Bihar and people have responded to it. People of Bihar are avenging the U-turn taken by Nitish Kumar,” Tejashwi Yadav said.

The Jokihat assembly seat was left vacant after the sitting JD-U lawmaker quit the party and joined the RJD following Nitish Kumar’s decision to go with the BJP last year.

The Jharkhand Mukti Morcha bagged both the Assembly seats of Silli and Gomia in the state.