The Arab country will embark on a non-oil economy by 2020. The expat community welcome the proposed Green card system ….reports COT Azeez

The deputy crown prince said another way to drive up non-oil revenue is by boosting the kingdom’s own military production. Saudi Arabia was the world’s third-largest arms buyer last year, with purchases of more than $87 billion, yet only 2 percent was for locally-produced weaponry. But in military ranking the country’s position was 20th. 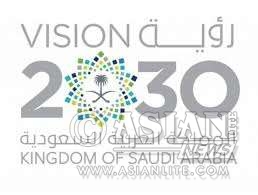 Most of the military equipment being imported from abroad. Germany and Britain exports more.

Vision 2030 sets out a goal of localizing more than half of Saudi Arabia’s military spending and creating a military industries holding company that would be initially fully owned by the government.

“We are now about to establish a holding company for the military industries 100 percent owned by the government that will be listed later in the Saudi market,” Prince Mohammed told Al-Arabiya TV.

Speaking in a television interview, he said planned sweeping reforms, of which the proposed green card is one, will be implemented even if oil prices rise back above $70 a barrel and pledged to end Riyadh’s dependence on crude revenue by 2020.

Saudi Arabia unveiled a bold reform plan aimed at weaning the country off its “addiction” to oil in a bid to prepare the next generation of Saudi leaders for the domestic pressures of youth unemployment and revenues eroded by lower oil prices.

In wide-ranging interview, the deputy crown prince described the kingdom as having an “addiction to oil” that had hurt development in other sectors and said a planned partial initial public offering of the state-owned oil giant Aramco was part of the reform program.

“The vision is a road map of our development and economic goals,” he said. “Without a doubt, Aramco is one of the main keys of this vision and the kingdom’s economic renaissance.”

The project, which includes plans to float a stake in the world’s largest oil company, Aramco, and set up one of the world’s biggest government investment funds, is meant to provide a blueprint for sweeping reforms to steer the OPEC kingdom away from its decades-long reliance on cheap-to-produce oil.

King Salman said in a televised announcement that the Cabinet approved the plan, known as Vision 2030, and called on Saudis to work together to ensure its success.

Deputy crown prince Mohamed Bin Salman serves as the country’s defense minister and chairs a committee to oversee economic policymaking. That committee, the Council on Economic and Development Affairs, has been focused on reorienting the kingdom away from its heavy reliance on fuels, creating jobs and boosting foreign investment.

Lower oil prices pushed Saudi Arabia into a budget deficit of nearly $100 billion last year and a projected deficit this year of $87 billion. Despite efforts to limit reliance on its main export, oil accounted for more than 70 percent of the state’s revenue in 2015.

He put the estimated value of Aramco at more than $2 trillion and said less than 5 percent would be offered to public shareholders. Subsidiaries of the company would also be part of the share sale, he said.

The Aramco shares would be listed on the Saudi stock exchange, the Tadawul, and on an international exchange, possibly in the United States.

Muslims and Arabs living in the country for decades would benefit from the introduction of Green card system.

Many expatriates hope the Green Card system will replace the current Sponsorship System.  Expatriates living in Saudi Arabia will be required to pay Zakat and Value Added Tax to the Government apart from insurance premiums. They will be allowed to own business and residential properties as well.

Saudi Arabia plans to set up a holding company for military industries that would be fully owned by the government at first and listed later on the Saudi bourse, Prince Mohammed said.