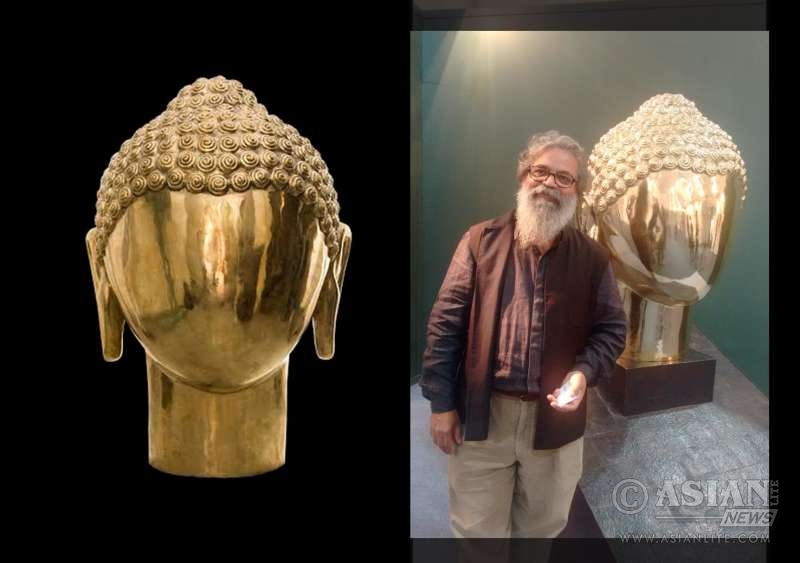 “My Buddha reflect the times we live in,” says eminent sculptor K.S. Radhakrishnan whose sculptural Installation “Shunya Buddha” is showing at the ongoing India Art Fair 2016.

In a departure from his signature sculptures, the artist has attempted larger than life heads of two faceless Buddhas in two different finishes – gold and coal.

The static, stable heads may not be a direct political statement from the artist, but he says that the brooding Buddha is his response to the current political atmosphere where artists’ voices have been muffled.

“Like every artist, I also respond to situations. One doesn’t have to be extrovert all the time. You internalize in a different way. It’s about experiencing the serene space,” said the artist who is known for his open-air public works.

While one of the figures is transparent, the other one is opaque, juxtaposed with two different opposites. “The Buddhas are faceless because I am leaving room for the viewer to interpret and imagine,” said Radhakrishnan, who has been working on the Buddhas for a year.

A strong proponent of public art, the artist believes that art fair will close the gap between art and public. “It’s heartening to see the open space given for artworks and galleries in the Fair. Every work of art demands a lot of space.”

“Either art has to go to the public or the public has to come to the art,” says the artist who has many sculptures in the public space.

His sculptures titled ‘Behroopi’ will be put up in a public park in his hometown Kottayam soon. “ I haven’t taken money from the government or public for this. You can’t wait for commissions. I believe, its the responsibility of an artist to take art to the public,” he says.

The eighth edition of the four-day India Art Fair, which began at the NSIC Grounds in Okhla will conclude on Sunday.