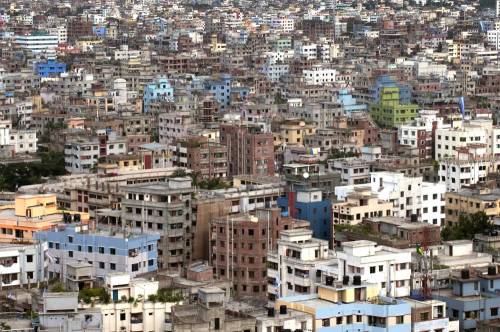 Plagued by chronic sand shortage following a ban on its indiscriminate mining, a scientific project undertaken by Goa’s structural experts and Britain’s University of Bath involving plastic may well bring cheer to the beleaguered real estate industry in the state.

Academics in government engineering and polytechnics in Goa, in collaboration with their British counterparts, are working on a project which aims to replace sand with used and treated plastic carry bags in concrete mix.

The objective of the research according to Purnanand Savoikar, a professor at the Goa Engineering College, which has been funded under the United Kingdom India Education and Research Initiative, is to create “green and sustainable concrete”.
“It is a two-year project. We anyway throw away plastic as garbage, so let’s harness this waste. Also, if this project is a success, factors like irregular supply of sand due to ban or other factors can be overcome,” Savoikar said.
The sand availability crisis that has been plaguing Goa for over the last couple of years had also weighed on his mind while coming up with the project, Savoikar said, even as realty sector stakeholders claim they have to rely on poor quality sand which is often smuggled in from neighbouring states.
“At present, the construction industry in Goa is growing rapidly and requires continuous supplies of cement, stone aggregates and sand. Hence, this project, which aims at the development of structural concrete from plastic waste as partial replacement for sand offers immediate environmental and economic benefits to society,” he said.
A pilot study undertaken by Savoikar and his team at the Government Polytechnic in Mayem, a village 30 km from Panaji, has already replaced sand with 10 percent plastic in concrete, but it gave rise to issues like minor reduction in compressive strength of the mix.
It is chinks like these which the association with the University of Bath is expected to iron out.
“What we are trying to establish is whether the plastic-mix in concrete will emerge stronger, say, 10 years later. Would it be more susceptible to fire? In case of fire, will it emit fumes that could be more risky for the inhabitants?” Savoikar noted.
The British varsity, he said, had all the facilities and equipment to conduct such durability and quality tests. John Orr, from its Department of Architecture and Civil Engineering, who is currently in Goa, said that the project itself was unique and had potential.
“We welcome the collaboration. University of Bath is the top university in the UK as far architecture is concerned and we have the facility to carry out the tests required to check the quality of concrete samples sent to us,” Orr said.
According to Manguirish Pai Raikar, Assocham’s chair for small and medium enterprises, the project, if successful, would help Goa – which does not have a single efficient garbage management system – get rid of its plastic garbage.
“While it will save our ecology, the project, if successful, will also rid Goa of plastic,” Raikar said.