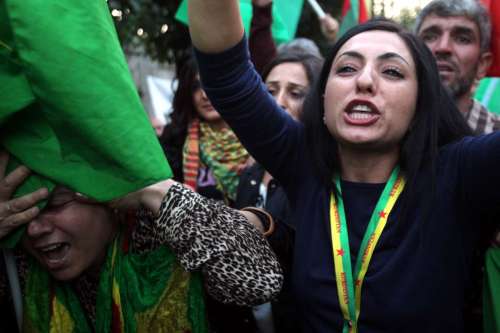 The Syrian city of Kobane, where resistance against jihadis of the Islamic State (IS) has become a symbol of Kurdish unity, is also an unprecedented example of equality for its women, who fight side by side with men in the streets.

The images of Kobane, under siege by the IS for the past 40 days, and especially of women of the Kurdish People’s Protection Units (YPG) defending their city with a Kalashnikov in their hand and a smile on their face, have been seen worldwide on social networks.
“Kobane’s resistance has mobilised our entire society and most of its leaders, including myself, are women. Those of us on the front lines are well aware of the Islamic State’s treatment of women. We expect women around the world to help us because we are fighting for the rights of women everywhere”, wrote commander Meysa Abdo last Tuesday in The New York Times.
In an article titled “A Town Shouldn’t Fight the Islamic State Alone”, Abdo, one of the fighters in charge of defending the Kurdish enclave, said “the people of Kobane need the attention and help of the world”.
The commander, in her forties and known for her nom de guerre “Narin Afrin”, is admired and appreciated by the militias, who consider her a strong leader, capable of taking decisions in any circumstance and fully devoted to her troops.
Another woman linked to Kobani who has attracted worldwide attention over the past days is Rehana, a Kurdish fighter of whom it is said she alone killed more than 100 IS fighters.
Rehana was allegedly captured recently by the jihadis, who decapitated her and published a photo of one of their members holding her severed head.
Although some journalists in the area have described this as a hoax, her fellow Kurdish fighters have vowed to avenge her.
According to Qatar’s Al Jazeera TV, at least 35 percent (some 15,000) of the Kurdish combatants fighting in Syria for the past two years are women.
And their numbers jump to between 50 and 60 percent within the ranks of the estimated 2,000 fighters defending Kobane, according to Kurdish sources.
Jihadis “have twisted Islam”, Kurdish commmander Dalil Derki told the Russian TV RT.
“In their philosophy, women don’t have their own role in society. Their philosophy and culture is they believe that if they are killed by a woman they won’t go to heaven. Instead they will go to hell.”
The women fighters are “an example for all women in the world”, he said.
Women in Kurdistan have a long history as warriors, as members of a people used to fight oppression, especially in Syria, Iraq, Iran or Turkey, the countries that shared Kurdish territories at the end of World War I.
Just to name a few, Adela Kham, known as the “brave princess”, ruled Kurdish territories between Iran and Iraq in the 1920s, and Leyla Qasim in 1974 became the first woman executed by the Ba’ath regime in Iraq for her involvement in a Kurdish students’ movement.