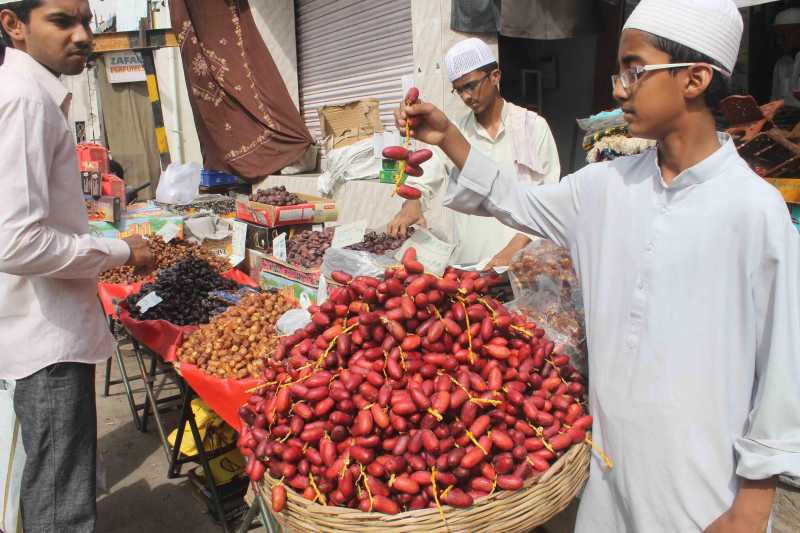 Mohammed Shafeeq from Hyderabad says Ramadan is a a month of fasting, feasting and shopping by India’s Muslims

India’s 140 million Muslims, who constitute the world’s third-largest Muslim population, observe Ramadan with devotion and fervour. The holy month Ramadan, which began in India Monday, is a month of fasting, compassion and charity as Muslims try to move closer to Allah through sacrifice, surrender and empathy towards have-nots.

The month also witnesses huge economic activity. Parts of cities like Delhi or Hyderabad or Kolkata or Mumbai, with a large Muslim population, come alive, especially in the evenings. The markets teem with people buying dates, fruits and the fried items for ‘iftar’ or breaking of the fast. The occasion brings together the devout in mosques and at community ‘iftars’ as the holy month provides unique opportunity to foster unity and brotherhood.

One of the significant features of Ramadan is that it creates empathy towards have-nots and encourages charity. The person who fasts develops empathy towards the hungry. For adult Muslims who can’t fast because of ill-health, it is obligatory to feed a poor person every day.

Dozens of organizations distribute free rations, clothes and even money among poor families so that they also join the month-long festivities. During the month, Muslims who possess wealth in excess of minimum exemption limit, pay ‘zakat’ or 2.5 percent annual tax to the poor and the needy. All the Muslims, irrespective of their wealth and age, have to pay ‘fitra’ (2.5 kg wheat or equivalent amount) before Eid-ul-Fitr, which marks the end of Ramadan.

Shopping continues till late in the night with the people tasting ‘haleem’, a special delicacy of Ramadan prepared by hundreds of hotels and roadside eateries. The worshippers throng the mosques for prayers till around midnight. The activity resumes in the wee hours of the day with people waking up for ‘sahr’ or pre-dawn meals followed by the morning prayers.
Communal harmony will be in full display at ‘Iftar’ parties hosted by political and non-political organizations and individuals.
The president, the vice president, the prime minister and other ministers at the centre, as also governors and chief ministers in states and leaders of various political groups, host ‘iftar’ parties every year.
Islamic scholars say Ramadan is a spring of good deeds and Muslims thank the Almighty for revealing the holy Quran, which is a complete guidance not just for Muslims but the entire humanity.
‘Roza’ or fast in Urdu came from Arabic word ‘saum’ meaning to abstain. During the fast, observed every day from dawn to sunset, Muslims abstain from consuming any food or water or engaging in sexual relations. One of the five tenets of Islam, ‘roza’ is obligatory for all adult Muslims, except those who are ill and travelling.
The devout seek Allah’s forgiveness and mercy by daily offering ‘namaz’ five times and also additional ‘namaz’ during night like ‘Taraweeh’ and ‘Tahajjud’ and reading of the holy Quran.
“O you who have believed, decreed upon you is fasting as it was decreed upon those before you that you may become righteous,” says the holy Quran (chapter 2, verse 183).
“Roza is not an ordinary worship. Its significance can be gauged from the fact that Prophet Mohammed used to pray to the Almighty to give another opportunity to observe Ramadan,” said Moulana Mohammed Hussamuddin Sani Jafar Pasha.
The head of Hyderabad-based Jamia Islamia Darululoom said while other forms of worship can be seen by people, ‘roza’ is purely between the believer and the Creator. “A person may tell the world that he is fasting but may eat or drink in private. He, however, refrains from doing so because he knows Allah is watching him. The month trains him to develop self-control and patience and abstain from deeds prohibited by Allah,” he said.