Anando Bhakto looks in to the plight of Bahais. Persecuted in Iran, Baha’is worse off in Iraq 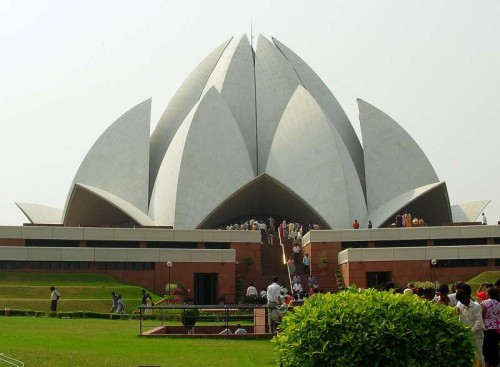 While the rising tide of arrests of Baha’is in Iran and destruction of their cemetery in Shiraz continues to grab headlines, the community – best known in India for their magnificent lotus-shaped marble temple here that is visited by thousands every day – is facing no less threat to its physical safety in neighbouring Iraq, one of the places of origins of the religion.

Spread in small numbers in and around Baghdad, the Baha’is continue to face social exclusion even after the fall of Iraqi president Saddam Hussein, whose Baath Party banned the religion in 1970.

“One Baha’i woman we interviewed said that after she was freed from the prison of Saddam Hussein’s regime, she felt that she had moved from a small prison to a societal one, harsher and more violent from the former,” Ali Mamouri, Middle East expert and commentator on religion, said in an e-mail interview from Baghdad when asked if the religious minority is better off in Iraq than in Iran.
Shedding light on the plight of this small religious minority, Mamouri added that the fear of persecution is so strong at present that most Baha’is are “still hiding, living in fear of declaring their social identity and preferring not to practise their religion in public”.
M. Merchant, programme officer at Baha’i Office of Public Affairs, said that in Iran, their population has shrunk to a mere three lakh out of a total of nearly six million the world over.
“India, where over two million people of the community live, is home to the largest Baha’i population while in Iraq no official record of their demographic statistics is available,” Merchant said. .
The Bahá’í faith is the youngest of the world’s independent religions. Its founder, Bahá’u’lláh (1817-1892), is regarded by Bahá’ís as the most recent in the line of Messengers of God that stretches back beyond recorded time and that includes Abraham, Moses, Buddha, Krishna, Zoroaster, Christ and Muhammad. The Baha’i faith considers itself independent of Islam.
“The religious matrix of the Bahá’í faith was Islam. Much as Christianity was born out of the messianic expectations of Judaism, the religion that was to become the Bahá’í faith arose from eschatological tensions within Islam. In the same way, however, the Bahá’í faith is entirely independent of its parent religion,” says the website for information resource of Baha’i international community.
Iraq is historically very important to the Baha’i faith since Baha’u’llah spent 10 years there and declared his religious call. The community, however, has shrunk to a miniscule size today due to continued violence against the faith.
The Baath regime in 1970 deprived the Baha’is of their property and forbade them from listing their religion in civil records. This was followed by the execution of many of the community’s political and religious followers.
“The continued harassment compelled Baha’is to either completely close themselves off or emigrate from Iraq. There are no official statistics of Baha’is in Iraq and their current stregth remains unknown as the adherents are too scared to reveal their identities,” Mamouri said.
Nilakshi Rajkhowa, director, Baha’i Office of Public Affairs here, said that recent fatwas issued by Muslim religious scholars stressing the importance of accommodating diverse beliefs have not been of much use.
“Even the house of the prophet (Baha’u’llah) in Baghdad which used to be a piligrim house has been taken over and occupied by the government,” Rajkhowa said.
In the Middle East, Africa and Europe, Muslim religious figures have condemned attacks on the Baha’is, in particular in Iran, and called for peaceful coexistence. Notable among them is Iranian Ayatollah Abdol-Hamid Masoumi Tehrani who denounced intolerance against the community.
“But the situation of Baha’is has not changed. Baha’is have neither got official recognition nor have they regained their confiscated property,” Mamouri pointed out.
As the militants from ISIS (Islamic State of Iraq and Syria) capture swathes of land in Iraq, wreaking havoc on non-Muslims and those they call apostates, like the Yazidis, their disposition towards Baha’is is not immediately known.
“Baha’is don’t exist in the area under control of IS (Islamic State). They are mostly in Erbil, Suleimaniah and Baghdad,” Mamouri said.