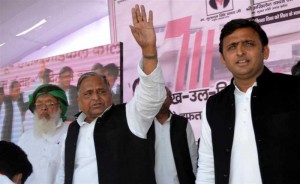 The communal violence in Indian town of Saharanpur should be halted at once before it spreads and becomes uncontrollable, a Pakistani daily said in an editorial.

The violence was a result of a land dispute between the Muslim and Sikh communities in Saharanpur and so far, it has claimed two lives, the Daily Times said in an editorial.

“Saharanpur is a place under direct influence and control of Prime Minister Narendra Modi and is suffering intolerance and aggression in the form of religious discrimination,” the editorial said.

“It is a matter that needs to be sorted out before a large-scale eruption of communal riots breaks out, the potential is there and it must be curbed.”

The editorial said that the Muslims in India and Pakistan were, “extremely weary of what would be of their lot once Narendra Modi came to power after controversies surrounding his role in the 2002 Gujarat riots.”

“If the above-mentioned two incidents are anything to go by, the forecast looks grim for the many Muslims in India, especially in Uttar Pradesh,” the editorial said.

The editorial also mentions another incident which has caused immense insult to the Muslim community.

“A Shiv Sena MP, Rajan Vichare, was videotaped last week, force-feeding a Muslim catering supervisor in New Delhi’s Maharashtra Sadan. This is a despicable act because Muslims are observing the holy month of Ramzan and forcing food down a Muslims throat while he/she is fasting is a grave insult to religious sentiments.”

Vichare in his defence said that he committed this deplorable act because he found the food at the Maharashtra Sadan to be low in quality and substandard.

“The Shiv Sena party which is in close alliance with the Bharatiya Janata Party (BJP) headed by Narendra Modi, speaks volumes for the kind of sensitivity this newly formed government in India holds for its Muslim minority,” the editorial said.

“The force-feeding incident highlights that when it comes to regressive behaviour and intolerance for religious feelings and sensitivities, both countries, India and Pakistan, have a lot of demons in their closet.”

“Wherever religious insensitivity raises its ugly head, there will be agitation and frustration. Modi would do well to remember that,” the editorial concluded.