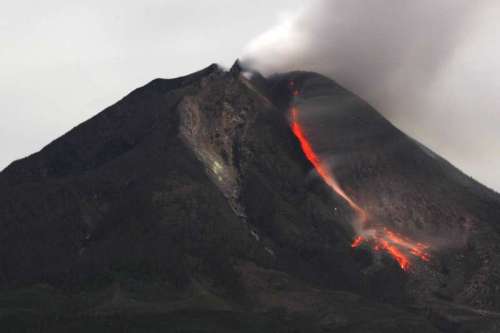 Thousands of people living near the Philippines’ Mayon Volcano Tuesday were ordered to be evacuated after a warning was issued that “hazardous eruption is possible within weeks”.

In its 24-hour observation, the Philippine Institute of Volcanology and Seismology (PHIVOLCS) said that Mayon Volcano in Albay province, had generated 32 earthquakes and 72 rock fall events since Monday, Xinhua reported.

This prompted the agency to place the restive volcano under “Alert Level 3”.

“Alert Level 3 means that magma is at the crater and that hazardous eruption is possible within weeks,” PHIVOLCS said.

The agency recommended the enforcement of the 6 km radius permanent danger zone around the volcano and 7 km extended danger zone on the southeastern portion due to risk of rock falls, landslides and sudden explosions as well as dome collapse that could generate hazardous volcanic flows.

PHIVOLCS official Ed Laguerta said the areas along the possible volcanic flow are the cities of Legazpi, Ligao and Tabaco and the towns of Daraga, Camalig and Malilipot.

“The southeastern part of the volcano’s dome has eroded from past eruptions. This is where hazardous volcanic materials will flow then down to these areas,” said Laguerta.

“Presently, the volcano is already ejecting fragments from past volcanic activities. We are most concerned about the pyroclastic flow because it can move very fast and can cause death,” he added.

The Philippine military said that it will deploy 50 vehicles to assist in the evacuation of 10,000 families from 60 villages that will be directly affected by Mayon Volcano’s imminent eruption.

Its most destructive eruption was back in Feb 1, 1814.

This event affected the southern slope of the volcano, specifically Camalig, Cagsaua, Budiao, and Guinobatan, which resulted in 1,200 casualties.

The ruins of Cagsaua Church wherein only the bell tower remains standing is a reminder of this disaster.