Further hardening his stand on seat- sharing with BJP, Shiv Sena president Uddhav Thackeray on Monday said he has rejected the saffron ally’s demand for contesting 135 seats in Maharashtra assembly polls and hinted at going it alone, saying “everything has an alternative”, according to Times of India. 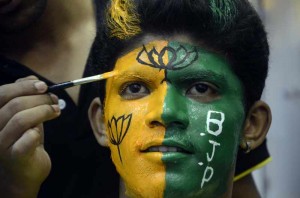 He, however, clarified that talks are still on to clinch a seat-sharing formula. “They (BJP) offered a proposal under which they wanted to contest 135 seats and I have rejected it,” Uddhav, who had on Saturday asserted the next Chief Minister would be from “Shiv Sena only” if the saffron alliance came to power, told reporters.

Reflecting the growing tensions between the two oldest allies in the Centre’s ruling NDA, he said, “Everything has an alternative. I have conveyed it to BJP that I can’t go beyond a point (over the number of seats to contest).” He was asked whether Shiv Sena had kept open the option of going to the hustings alone, the report said.

Senior BJP leader and spokesman Rajiv Pratap Rudy had yesterday said his party had proposed that after allotting seats to smaller allies like RPI(A) and Swabhimani Shetkari Sanghatana of Raju Shetty, the two major constituents of ‘Mahayuti’ (grand alliance) should contest an equal number of 135 seats.
Shiv Sena and BJP had contested 169 and 119 seats respectively in the 2009 assembly election.

Uddhav also said since “talks are still on and till the decision on alliance is reached, I will not say anything negative”.

“I have nothing to say on BJP spokesman Madhav Bhandari’s comment that the talks have been stalled and BJP is comtemplating going alone. It is surprising that those who are not involved in the talks are saying discussions are not happening,” he told Times of India.