28 Sikhs were killed in an attack on a Sikh temple on March 25.  Intelligence agencies say that Lashkar-e-Tayibba and Haqqani Network, controlled by Pakistan’s ISI, are responsible for the terrorist attack. The Islamic State claimed responsibility but defence experts are saying it’s a plot to divert investigations ….reports Asian Lite News

Lord Rami Ranger, Chairman of the British Sikh Association, has appealed to the British government to extend help to the Sikh community in Afghanistan.

28 Sikhs were killed in an attack on a Sikh temple on March 25.  Intelligence agencies say that Lashkar-e-Tayibba and Haqqani Network, controlled by Pakistan’s ISI, are responsible for the terrorist attack. The Islamic State claimed responsibility but defence experts are saying it’s a plot to divert investigations.

This was the deadliest attack since the peace deal was signed between the US and Taliban in Doha, where the US has agreed to completely withdraw its troops from Afghanistan. The deal was signed in the presence of Pakistani Foreign Minister Shah Mahmood Qureshi.

“I condemn the most barbaric and murderous attack on innocent Sikhs in Kabul in a Gurudwara when they are praying,” Lord Ranger said. “This is a most appalling act of cowardice on unarmed innocent people. I would like all the governments to condemn this act. I am appealing to the Muslim Council of Britain to condemn this horrible act in the name of religion.

“No religion preaches to kill fellow human beings,” he added. “There for we must unite against this common threat and strive for peace in the region.”

Lord Ranger, one of the most influential Western politician of Indian-origin, appeals to the British government to extend all the support to the Sikh community.

“The minority Sikhs are in fighting for existence in Afghanistan,” Lord Ranger told Asian Lite. “I am urging Foreign Secretary Dominic Raab to instruct Her Majesty’s Representative in Afghanistan HE Alison Blake to extend all the assistance to the Sikh community in Afghanistan.”

“We are deeply saddened by the loss of life and our hearts go out to the bereaved families and friends,” the US-based forum said in a statement. “We ask that the Afghanistan government set-up an impartial Commission to investigate this heinous crime and bring the culprits to justice.”

The WKAF expresses its solidarity with our global Sikh community at this moment of tragedy and demands from the Afghan government an impartial inquiry into the massacre with the assistance of international agencies such as Amnesty International, Human Rights Watch and United Nations High Commissioner on Human Rights.

The Chairman JK People’s Justice Front Aga Syed Abbas Razvi also condemned the Kabul terror attack saying targeting of a religious place in the midst of the Covid-19 is anti-Islamic and against the teachings of Holy Prophet Mohammad (PBUH). Islam is a religion based on peace and never allowing anybody to justify any body’s killings on the grounds of religion, sex, caste or anything else.

Razvi added that all those responsible be held accountable and our party stand shoulder by shoulder with our Sikh brethren in this irreparable and unfortunate tragedy.

Peace Deal in Limbo as LeT, Haqqani Network On Killing Spree in Afghanistan 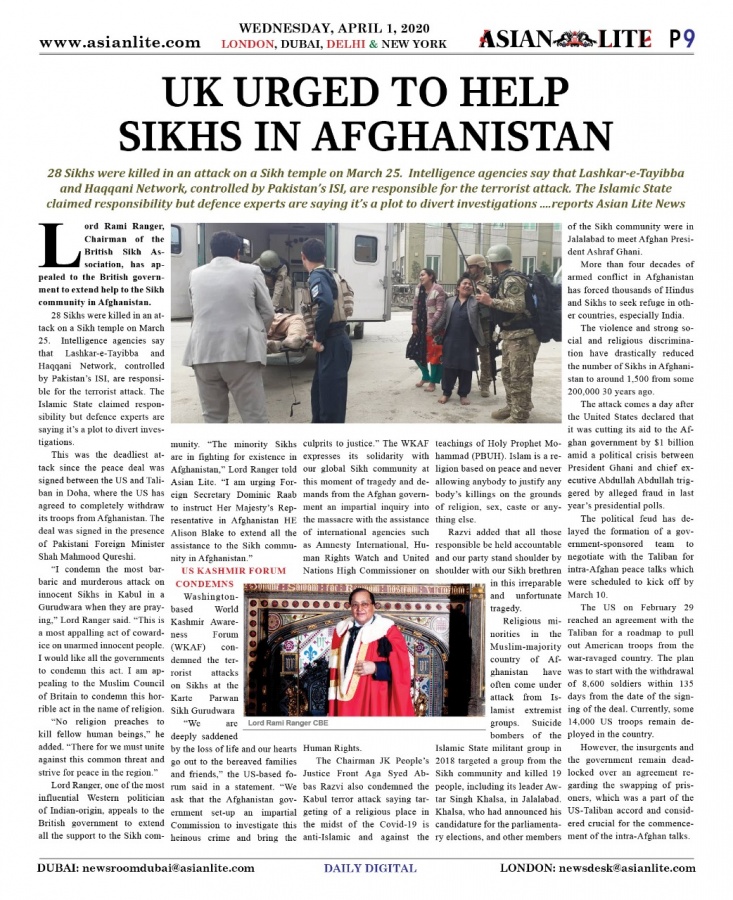