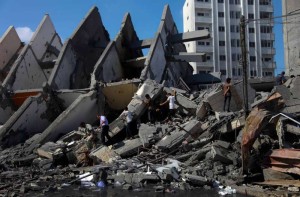 The United Nations Tuesday announced an agreement between Israel and the Palestinian Authority on the rebuilding of the Gaza Strip, devastated in the recent Israeli military offensive.

The pact will allow urgent reconstruction work to be carried out in Gaza, while ensuring that materials entering the area will not be used for other purposes, Robert Serry, the UN Special Coordinator for the Middle East Peace Process, said.

The agreement “provides security assurances through UN monitoring that these materials will not be diverted from their entirely civilian purposes,” Serry said, alluding to Israel’s charge that Hamas has used building materials to construct tunnels to infiltrate Israel.

Serry said he hoped the agreement would be up and running as soon as possible and called it “an important step” toward the goal of ending the restrictions imposed by Israel as well as a “signal of hope for the people of Gaza.”

Serry, who visited Gaza last week, told the Security Council Tuesday that he observed truly shocking levels of destruction of infrastructure, hospitals and schools as well as totally demolished neighborhoods.

Some 18,000 homes were destroyed or significantly damaged during the Israeli offensive, leaving around 100,000 people homeless.

It is estimated that the cost of reconstruction in Gaza would be at least $4 billion, but it could go as high as $12 billion, the coordinator of the UN Agency for Trade and Development, Mahmoud al-Khafif, said.

Two-thirds of the casualties were civilians, according to figures from Gaza’s Health Ministry.