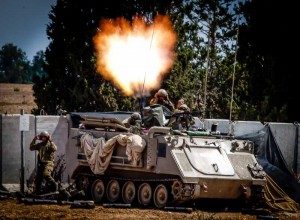 The toll in the ongoing Israeli offensive on the Gaza Strip has escalated to 835, with more than 5,300 injured, officials said Friday even as UN Secretary-General Ban Ki-moon called for a ceasefire during the Muslim holiday of Eid ul-Fitr.

According to the health ministry in the coastal enclave, 29 Palestinians were killed and more than 200 injured as Israel continued its air strikes, Xinhua reported.

According to a Hamas statement, the Israeli war jets reduced to rubble the house of one of its senior leaders, Salah al-Bardaweel, in the southern Gaza Strip town of Khan Younis.

The Islamic Jihad movement also said that Salah Abu Hassanein, a local leader of the movement in the southern Gaza Strip town of Rafah, was killed together with two of his sons when Israeli war jets’ missiles struck their house.

The Israel Defence Forces (IDF) Friday said that one soldier was killed during an operation in the northern Gaza Strip.

The death of the 36-year-old Master Sergeant Yair Ashkenaz has raised to 33 the toll of Israeli soldiers since the start of the military campaign July 8.

In Cairo, UN Secretary General Ban called for an unconditional humanitarian ceasefire in the strife-stricken Gaza Strip during the Muslim holiday of Eid ul-Fitr that will begin Monday.

“This truce should last through the Eid ul-Fitr holiday period,” Ban said in a statement after meetings with US Secretary of State John Kerry and Egyptian Foreign Minister Sameh Shukry.

Eid ul-Fitr, also called Feast of Breaking the Fast, is an important religious holiday celebrated by Muslims worldwide to mark the end of the one-month Ramadan. The holiday will last for three days.

Ban urged an “immediate pause”, which he believed would pave the way for a long-term ceasefire, Xinhua reported.

“The pause can and should take effect immediately without conditions, without excuses, without delay,” the statement added.

Egypt offered last week an initiative to achieve ceasefire in Gaza unconditionally. The proposal was accepted by Israel but rejected by Hamas as there was no “comprehensive solutions”.

Meanwhile, the World Health Organization (WHO) in Geneva called for safe passage in the Gaza Strip to evacuate the injured in the 18-day Israeli offensive which has left more than 800 Palestinians, mostly civilians, dead and over 5,000 injured.

The WHO highlighted the importance of putting up this humanitarian corridor for the safe transfer of the wounded out of the Strip to receive treatment, Efe news agency reported.

Four hospitals in Gaza have been damaged since Israel began its military operations against the Strip July 8.

Al Aqsa Hospital, which was the main hospital in the Gaza Strip, was the last of the medical facilities to be hit by the Israeli shelling.

Also, 12 clinics, a centre for people with disabilities, two water desalinisation plants and 10 ambulances were struck in the raids.

The World Food Programme (WFP) Friday said it had succeeded in supplying emergency food aid to 160,000 people in Gaza, in addition to 285,000 already being taken care of by the programme.

Meanwhile, the UN Children’s Fund (Unicef) condemned the killing of 10 Palestinian children in the last 24 hours.