The Sikhs who consider themselves to be greater visionaries than their Gurus. The Brotherhood of the Khalsa was established to make people equal and not unequal as the Khalistanis wish to do so despite the Sikh faith being based on uniting humanity rather than dividing it. Should we allow them to do what the Muslims did to Hindus and Sikhs in 1947 in a country of their birth and ancestors? …… writes Lord Rami Ranger 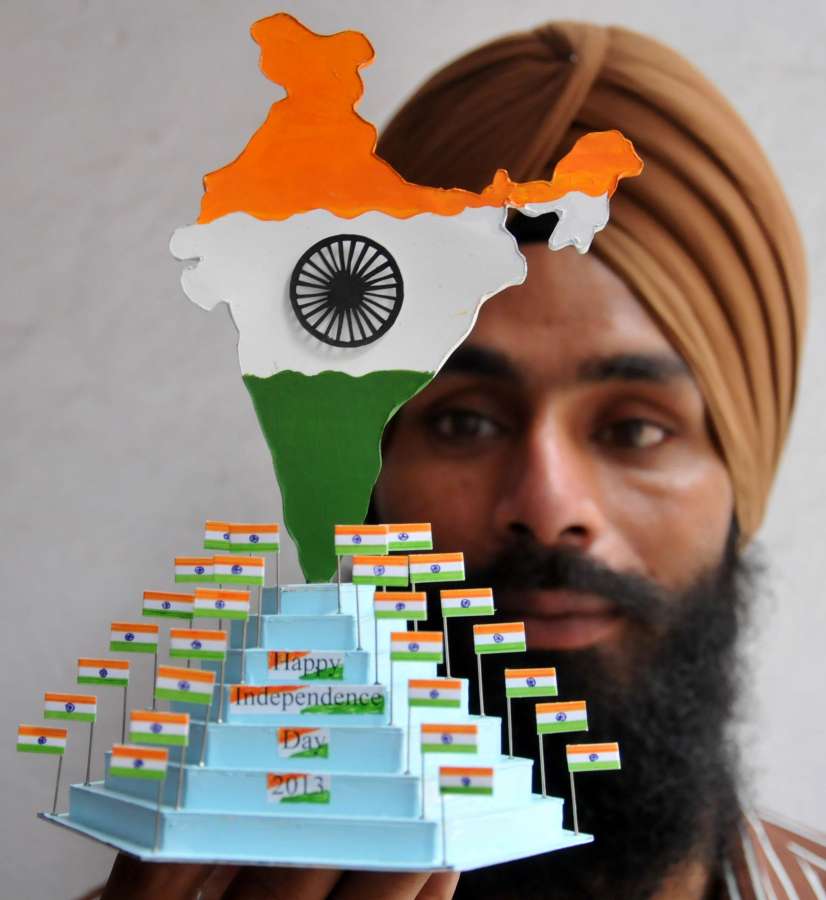 Sadly, from time to time, some self-appointed Sikhs appear from nowhere and start claiming to represent the aspirations of the entire Sikh community. They divert attention from our illustrious Gurus to themselves with anti-India rhetoric. It seems to be the easiest way to attract attention in the absence of merit. The media always pays attention to their negative activities and some politicians also join them for the votes these people might help them attract. These handful of Sikhs are doing enormous damage to the Sikh community, which is the most respected in the world, by going against the teachings of the Sikh Gurus who established the Sikh faith to unite humanity. Unfortunately, these lacklustre separatists are using the same religion to divide humanity for their selfish gains. They are now claiming Sikhs to be a different race when the Sikh Gurus said, “manas ki jaat sabhe eke pehchanbo”. Translated, this means ‘oneness of the human race’.

The Brotherhood of the Khalsa was established to make people equal and not unequal as the Khalistanis wish to do so despite the Sikh faith being based on uniting humanity rather than dividing it. Should we allow them to do what the Muslims did to Hindus and Sikhs in 1947 in a country of their birth and ancestors?

India is a secular and democratic country and as a result, we are all equals. If some Sikhs do not like the government, then they can always change it through the ballot box

They also demand a Kingdom for themselves which the Sikh Gurus never did. They will never get a Kingdom but will succeed in making Sikhs second class or even victims in the country that their Gurus and followers helped save from the tyranny and injustices of the then Mughal rulers by paying unparalleled supreme sacrifices. These so-called custodians of the Sikh faith are bringing hardship to the Sikhs in India whilst they are sitting thousands of miles away and enjoying the protection afforded to them by their American, Canadian and British passports. How inconsiderate are these Sikhs who advocate for a separate country whilst having no intention of living there? Did Guru Gobind Singh Ji seek protection in a foreign country whilst fighting for the religious freedom of his fellow Indians?

This shows how callous and indifferent these people are. It is worth remembering; these people attract a low calibre audience who are unable to appreciate the consequences for their fellow Sikhs in India and elsewhere. If they did, then they would be spending the same energy and time promoting India as their Gurus did and attract even more respect for the Sikhs.

It is a matter of pride for every Sikh that so many people in India and beyond are now adopting the Sikh values and also the teachings of Sikh Gurus to inspire their next generations. Many foreigners are adopting the Sikh faith as a result of the inspiring teachings of the Sikh Gurus. With increasing numbers of Sikhs settling across many countries of the world, the internet and social media are helping to generate awareness across more and more people about the lives and teachings of the Sikh Gurus and what they stood for. The world is in their awe as the Sikh Gurus were ahead of their time. They believed in human rights, equality for race, religion and gender long before the UN charter ever came about. Sadly, some Sikhs are bringing us adverse and negative attention.

Guru Tegh Bahadur Ji accepted martyrdom in Delhi, the capital of India, to uphold the religious freedom of Hindus. A unique example of a faith leader laying down his life to protect the faith of others. His martyrdom unleashed the fury of the Sikhs which led to the establishment of the Brotherhood of Khalsa by his son, the 10th Guru, Guru Gobind Singh ji. He did not rest until he was able to bring an end to the oppression and tyranny of the then Mughal rulers against those who did not follow their form of religion.

The 10th Guru not only sacrificed his own life as his father had done, but so did his wife and four sons for the religious freedom in India. As a result, every Indian feels that they owe the Sikhs and their Gurus a debt of gratitude for saving their ancient civilisation. The government of India celebrated the 350th Birth Anniversary of Guru Gobind Singh ji, the martyrdom of Guru Tegh Bahadur ji and now the 550th Birth Anniversary of Guru Nanak Dev Ji, the founder of the Sikh faith, not only nationally but also internationally. Every Government of India’s overseas mission is celebrating the life and teachings of Guru Nanak Dev JI  and are also establishing Chairs in Universities across the world to spread his message of love and harmony. No Sikh organisation can ever promote the lives and teachings of Sikh Gurus on a scale that the Government of India is doing. Sadly, some Sikhs are disgracing them with their misguided actions.

The Government of Pakistan, led by the Prime Minister Imran Khan, has opened the Kartarpur Corridor for Sikh pilgrims as a mark of respect for Guru Nanak Dev JI. The Government of India, led by Shri Narendra Modi, has reciprocated by accepting the offer by a rival country. This shows the respect the world has for our Gurus and faith. The time has come for the Sikhs to enjoy respect throughout the world due to the vision and sacrifices of our illustrious Gurus for mankind. I am afraid that these separatists may stop the Government of India in its endeavour to promote the lives and teachings of Sikh Gurus on a national and international level due to their unpatriotic activities.

India is a secular and democratic country and as a result, we are all equals. If some Sikhs do not like the government, then they can always change it through the ballot box. Demanding extra privileges or rights by some Sikhs has brought us nothing but hardship. It was the Sikh leaders who broke Punjab into three parts: Punjab, Himachal and Haryana because some Sikh leaders could not rule a united Punjab. Now some Sikhs are trying to make Khalistan where their IQ can fit in the absence of merit. They would like to drive non-Sikhs out of Punjab by treating them as second-class citizens as did Mr Jinnah by creating Pakistan. No non-Sikhs would like to live in a religious state where they are second class, simply because of their religion.

Did we not learn from the tragedy of the Partition in 1947 when the religion card was used to carve out an Islamic country out of a secular India? Millions of innocent people were killed and displaced.

We have not seen peace in the subcontinent until now. We are now nuclear adversaries. The next war could unleash unimaginable death and destruction in the region. Besides, if we kill the diversity of a country, then we also kill its soul. We can see how India as a united country is progressive and becoming prosperous unlike Pakistan.

All that glitters is not gold, there could be infighting in Khalistan between Jats and non-Jats, between Amritdharis and Sahijdharis, between those who trim or colour their beards and those who do not. Women will need to cover their head and so on. The Sikhs will be put into religious straitjackets and controlled by the scholars of religion and not of anything else. We have already seen what is happening in other religious countries. They are spinning at the same place whilst the world is surging ahead unhindered by the religious Mafia.

Before 1984 there was no quota for Punjab to join the Indian Armed Forces and now there is. Due to the mutiny by some Sikh soliders during operation Bluestar, the Govt of India fixed a quota for Punjab to join the Indian Armed Forces. Only 2% soldiers can now join from Punjab according to their population. Who was responsible for this change? Sadly, the Sikhs themselves. The result is that farmers are committing suicide due to lack of land and employment. Many unemployed youths are on drugs and committing crimes to feed their habit. Before, they could join the Indian Armed Forces and turn out to be disciplined citizens and now the future for many is a bleak one.  Punjab was the richest province and known as the granary of India. It was called the breadbasket of India. Some Sikhs by demanding extra rights took on the Central Govt with dire consequences for their fellow Sikhs.

We all feel that we are right from our point of view as it is based on our education, experience and above all, vision. Only time can tell if we were right or wrong. We are already facing the consequences of leadership which divided Punjab in 1966, militant movement in the 1980s and now the Khalistan movement. Let us use intelligence rather than threats against a country of 1.3 billion people and now the 5th largest economy in the world with the 2nd largest army in the world. India is no longer a fragmented country. It is united and has modern security forces to quell any anti-India activists. Do we wish to turn Punjab into Kashmir with the Army everywhere?

We must follow our Gurus who were with India and as a result, enjoy respect in a secular country from the people of every faith. It’s time to stop scoring our own goals by going away from the ideals of our Gurus.

The Sikhs are Indians, will always be Indians, the protectorate of Mother India. 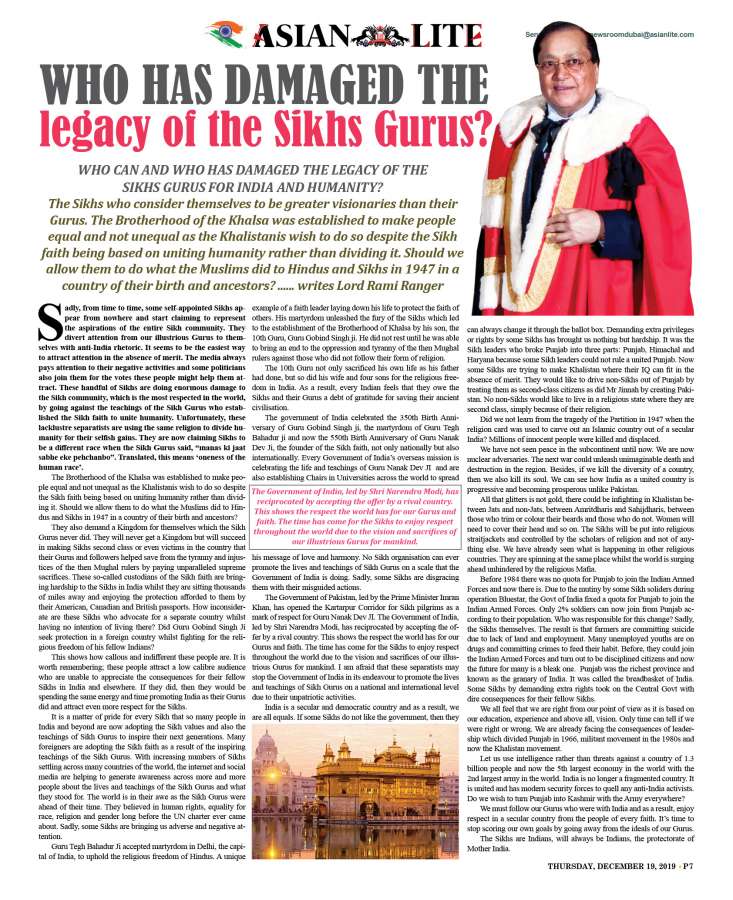