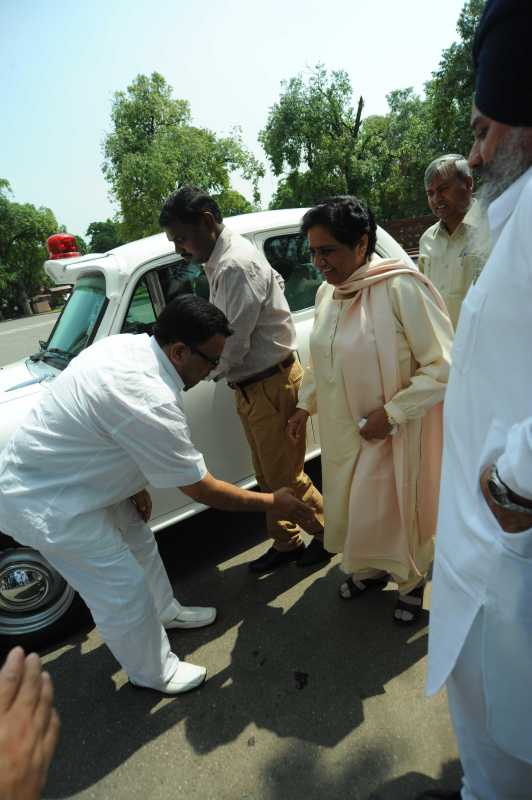 Will RJD chief Lalu Prasad Yadav’s political embrace with arch rival Nitish Kumar in Bihar be replicated by Mayawati and Mulayam Singh Yadav in Uttar Pradesh? Just days after the former Bihar chief minister suggested a similar patch-up in Uttar Pradesh to stop the Modi juggernaut, the proposal has no serious takers in the state, so politically divided are inflated egos and the caste matrix. 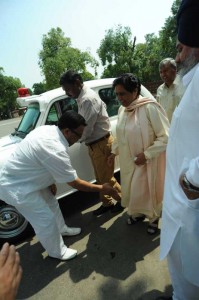 Leaders of both the Bahujan Samaj Party (BSP) and the Samajwadi Party (SP), who bitterly parted ways in the 1990s after briefly running a coalition government, rule out any possibility of such a reunion. “There is no question of any such thing happening in UP. Lalu and Nitish may have run out of their political charm but Behen-ji (Mayawati) is still at the centre of all political activity in the state,” mused a former BSP minister.Leader of Opposition in Vidhan Sabha and senior BSP leader Swamy Prasad Maurya said an alliance with the SP was an “unthinkable and non-negotiable preposition.”Mayawati, he told IANS, had made it clear that the party would contest the polls alone, adding that the party followers had still not forgotten the murderous attack on Mayawati by SP goons in 1995.Musing that the Dalits vote bank would realise their folly and see through the political mirage spun by the Bharatiya Janata Party (BJP) and return to the party fold in the run-up to the 2017 assembly polls, the BSP leader said the party would soon be in the reckoning.This, he said, is a big reason that the BSP would not align with any party. As for any talk of burying the hatchet with the ruling SP, a senior leader said this was not going to happen ever!Mayawati and Mulayam Singh Yadav hold serious grudges against each other, many of which are personal, said a political observer who not only witnessed the two regional satraps come together in the 1990s to form a government on a six-month rotational basis but also their bitter and acrimonious parting of ways. The coalition was stretched to the seams from the word go and culminated with the BSP leader alleging that Mulayam Singh Yadav’s men tried to kill her June 2, 1995, in the infamous state guest house incident.Insiders say Mayawati never forgot the incident and never forgave Mulayam Singh Yadav for what she said was “an act of goondaism carried out at the behest of the Yadav chieftain.” All links between the two snapped thereafter and the two emerged as bitter political rivals. They have never met thereafter, barring on one occasion when Mulayam Singh Yadav drove to the chief minister’s house a few years back for a meeting that was to discuss probable names for appointment to the state human rights panel.Yadav told this writer some time back that they barely exchanged pleasantries during that meeting, also attended by others. “As we were ready to go back, she mumbled that we should keep meeting (‘milte rehenge’) to which I snapped by why should we,” Yadav said. He also disclosed that on an earlier occasion he wanted to see the ailing BSP founder Kanshi Ram when he was ill but Mayawati told her staff that “it was not possible since Manyawar (Kanshi Ram) was very unwell”.The communication lines were forever snapped thereafter.BJP state president Laxmikant Bajpayi said if this alliance happens, his party would not be surprised. “We will not be shocked because we have been saying this all along. If they align it will only prove that they can stoop to any level to stop Narendra Modi’s positive politics that has been accepted by the people,” he added.Former chief minister and senior BJP leader Kalyan Singh said the union of the two leaders would turn out to be a damp squib.“They are a spent force both alone and the two together,” Kalyan Singh told IANS.Senior SP leaders have trashed Lalu Prasad’s suggestion, saying there can be no alignment with a “corrupt and casteist” party like the BSP.Though pushed to the political sidelines in the electorally crucial state, a patch- up between the SP and the BSP hence looks highly unlikely for now.