Prime Minister Narendra Modi said India-UAE ties go beyond trade and both countries will work together to fulfil the dreams of the Indian diaspora in the Gulf country. Modi also held an “engaging discussion” with his UAE counterpart Sheikh Mohammed Bin Rashid Al Maktoum on expanding defence and trade ties between the two countries….reports Asian Lite News

The two leaders also discussed ways to enhance cooperation in investment, security and people-to-people contacts to strengthen “our comprehensive strategic partnership”, Indian External Affairs Ministry Spokesperson Raveesh Kumar said after the meeting between Modi and Al Maktoum, who is also the UAE Vice President and the ruler of Dubai.

Dubai is home to a majority of the 3.3 million expatriate Indians in the United Arab Emirates (UAE).

Earlier in the day, Modi addressed a gathering of the Indian community.

“I assure you that we will work together to bring to reality the dreams you see, here and in India,” Modi said.

He was addressing hundreds of Indians working in the UAE who had gathered at the iconic Dubai Opera House here to listen to him.

“Our relation with the UAE is not just that of a buyer and a seller. It has become much more,” Modi said in his speech in Hindi.

He thanked the Gulf countries — a home to nearly 3.3 million strong Indian diaspora — for providing them “a home away from home”.

He also witnessed via videoconferencing the laying of a foundation stone of an Indian temple to be constructed on the Dubai-Abu Dhabi highway.

After visiting Palestine earlier on Saturday, Modi arrived in Abu Dhabi later in the evening on the second leg of his West Asia and the Gulf visit.

The two sides signed five agreements on Saturday, including a historic one on energy cooperation that awarded a consortium of Indian oil companies led by ONGC Videsh a 10 per cent interest in Abu Dhabi’s offshore Lower Zakum concession.

This is Modi’s second visit to the UAE after a 2015 trip.

After Dubai, Modi will leave for Oman on the third and final leg of his tour. 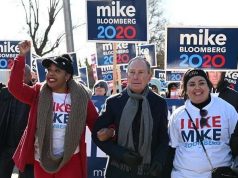