Governor Vajubhai Vala administered the oath of office and secrecy to Yeddyurappa at 9 a.m. at the Raj Bhavan amid tight security….reports Asian Lite News

Governor Vajubhai Vala administered the oath of office and secrecy to Yeddyurappa at 9 a.m. at the Raj Bhavan amid tight security.

Yeddyurappa, 75, took the oath in Kannada in the presence of party’s central and state leaders and its newly-elected legislators and senior officials.

Earlier, a three-judge bench of the apex court rejected a joint writ petition of the Congress and the Janata Dal-Secular (JD-S) to stall the swearing-in of Yeddyurappa as the Chief Minister at a special pre-dawn hearing. 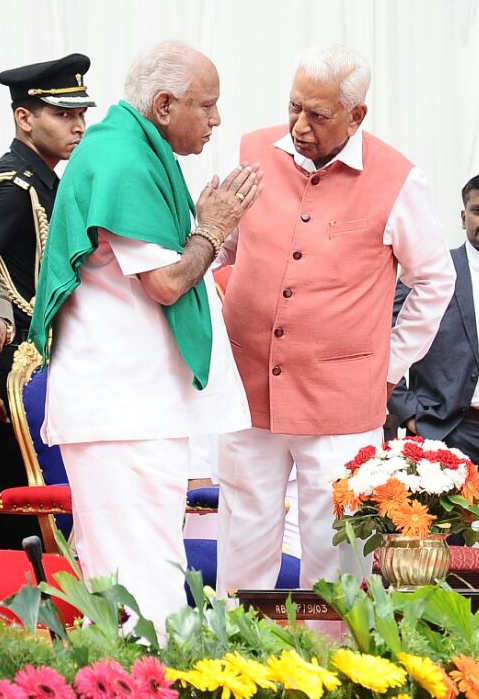 The top court, however, said the swearing-in of Yeddyurappa was subject to the final outcome of the matter before it and posted the case for further hearing at 10.30 a.m. on Friday.

The bench, headed by Justice A.K. Sikri, also sought the letter Yeddyurappa wrote to the Governor on Wednesday informing him his election as the Bharatiya Janata Party’s legislature party leader in Karnataka.

He was elected for the eighth time from the Shikaripura assembly segment in Shivamogga district of the Malnad region on May 12 when polling was held in 222 constituencies across the state and results were declared on Tuesday.

This is the third time Yeddyurappa took oath as the Karnataka Chief Minister, a decade after he became the BJP’s first Chief Minister in south India in May 2008 when the party came to power for the first time in Karnataka.

He was sworn-in for the first time as the chief minister in October 2007 as the party’s leader in the JD-S-BJP coalition government that lasted for over a month, resulting in President’s rule from November to April and mid-term assembly elections in May 2008.