As India marches on in unison to the enforced rhythm of digital drumbeats, the concerns of the common-man get reasonably multiplied when one comes across sensational Wiki Leaks reports such as the alleged cyber espionage by the American Intelligence Agency, Central Intelligence Agency (CIA) on our sensitive and valuable biometric data from the Aadhar database. Some Cyber tips in relation to the allegations of Aadhar card data breach in India….writes Gurjot S. Kaler

Lo and Behold ! Similar to the news in 2016 when 3.2 million debit cards in India belonging to SBI, HDFC etc had been reportedly compromised, the recent news of the Equifax date breach in Europe and Aadhaar card data breach in India has emerged under which some cyber criminals have purportedly managed to steal confidential information of almost 143 million Americans. As it stands out, the names, Social Security numbers, birth dates, addresses, and the numbers of some driver’s licenses have been severely compromised in one of the biggest hackings ever.

It is true that progressive strides in the technology-oriented digital age has its own shortfalls too. Internet and digitalization has overpowered our lives and as a result, the safety, security and sanctity of our personal information stands threatened in the wake of the rising cyber crimes. As India marches on in unison to the enforced rhythm of digital drumbeats, the concerns of the common-man get reasonably multiplied when one comes across sensational Wiki Leaks reports such as the alleged cyber espionage by the American Intelligence Agency, Central Intelligence Agency (CIA) on our sensitive and valuable biometric data from the Aadhaar database.

In this backdrop, it becomes imperative to talk about an important, yet often ignored aspect of cyber world, which is the topic of Cyber Ethics. These can be defined as a code of behavior for moral, legal and social issues on the internet or cyber technology which includes obeying laws that apply to our online behavior and thus, contributes towards having a safer and enjoyable internet experience. The computer ethics as a set of moral principles tend to govern our usage of computers; these serve as a measure of available standards of acceptable behavior and etiquettes while undertaking any kind of communication on computers.

As internet and the resulting digitalization has increasingly become an everyday part of our daily lives, it is imperative to remember some basic do’s and dont’s of the cyber world for an enriching, safe and secure cyber experience.

– Do not use computers or internet to steal others’ confidential information or harm others.
– Respect the privacy of others, just as you expect the same from others.
– Do not use other’s computer resources without their permission or authorization or proper compensation.
– Do not snoop around in others’ computer files.
– Do not pretend to be someone else or manipulate your real identity on internet.
– Always use a computer in a way that ensures consideration and respect for one’s fellow humans.
– Always respect copyright and policies; do not copy or use a proprietary software for which you have not paid.
–  Do not intentionally use the computers to retrieve or  modify the information of others, which may include password information, files, folders, etc
– Never be silent; always complain about any illegal communication and activities, if found, to the internet service providers and local law enforcement authorities.
-Do not use the internet as a medium of communication to harass others or vilify their social reputation.
-Avoid talking to strangers on the internet and maintain communication with friends, family and colleagues.
– Do not attempt to hack or break the security of any computer network or any user.
-Do not use computer or internet to send junk emails to anyone who doesn’t want to receive it.
– Do not attempt to mail bomb a site with mass amounts of e-mail to mail bomb their server.
-Do not send any malicious codes or viruses to other’s computers using internet.
– Do not share your computer or laptop’s information regarding user ID’s and passwords with anyone.
– Do not use rude or bad language while using emails, chatting, blogging and social networking; respect others’ views on internet. 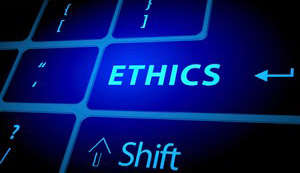 Thus, some basic level Do’s and Dont’s need to be understood, implemented and propagated by all users on internet to maintain the decorum of computer world. WWW actually stands for world wide web and not waste wild web. We must recognize that internet is not apart from universal society but it is a primary component of it. The ubiquitous Internet belongs to all and we must exhibit desired levels of sensitivity to national and local cultures, thus accommodating multiplicity of usage. To summarize, we should be honest, respect the rights, privacy and property of others online on the internet, akin to our offline life in society whereby we abide by various laws, processes and guidelines.  We live in a cyber world where we must behave in a responsible manner as good cyber citizens and follow certain basic level cyber ethics to enjoy a better cyber experience !