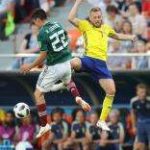 Although he has just accepted a move that will end his career back in his homeland to play with AIK, the 33-year-old, who has played for his country on 103 occasions, has spent most of his playing career in England with spells at Arsenal, Birmingham City and Sunderland and spent last season with Hull City in the English Championship (second division).

He admitted that Saturday will be a “special occasion” for him, reports Xinhua news agency.

The Swedes have only lost to Germany in this World Cup and have a good record against England in competitive matches.

“It’s a game I’m really looking forward to, it’s the quarterfinals of the World Cup and for me personally to be going up against England, the country where I spent 17 years, it’s obviously a little bit special,” Larsson said in a press conference .

England are favourites to beat the Swedes, but Larsson said he and his companions would not be focussing on the England players, but on maintaining the level of competition they have produced in the World Cup so far.

“We’ve got huge respect for England, they’ve got quality players all over the pitch, they’re a good team, but for us, as we have been doing for most of this tournament, we’re trying to focus mostly on ourselves,” he said.