There is a desperate shortage of organ donors, particularly donors from a black, Asian or minority ethnic (BAME) background, with people dying while waiting for an organ transplant…reports Asian Lite News

The Jain and Hindu Organ Donation Steering Group (JHOD) welcomes the change in law in England to help increase organ donors and the launch of the year-long campaign launched today by NHS Blood and Transplant (NHSBT) to explain the changes to everyone.

The change in law means that from Spring 2020, it will be considered that anybody over the age of 18 has agreed to opt in to be an organ donor, when they pass away, unless they have recorded a decision to say otherwise (or are in one of the excluded groups).

From Spring 2020, it will be considered that everybody over 18 has agreed to be an organ donor when they die unless they have recorded a decision not to donate or are in one of the excluded groups.

‘’The Hindu and Jain communities share a very powerful tradition of Sewa, understood as selfless service and Daan, which is giving without expectation,” said Lord Jitesh Gadhia. “Organ donation falls squarely into these core values, whatever branch of Hindu or Jain beliefs we might come from.”

Many community organisations have already been doing work over a long period, so our community has already prepared the ground work and we should see deemed consent as an opportunity to step-up our efforts towards implementation.”

“Organ donation is area where can act in a cohesive, co-ordinated and more united way across different community organisations and also take advantage of the Government’s offer of assistance to raise awareness through faith specific activities.   I would like to thank Kirit Modi for chairing the steering group and encourage all community leaders to provide him with their active support. ‘’

There is a desperate shortage of organ donors, particularly donors from a black, Asian or minority ethnic (BAME) background, with people dying while waiting for an organ transplant. The introduction of deemed consent in England from Spring 2020 alongside the extensive awareness campaign lasting a year from now, will encourage more Hindus and Jains to register on the NHS Organ Donor Register. It will also mean that more people will have conversations about organ donation with close family members. 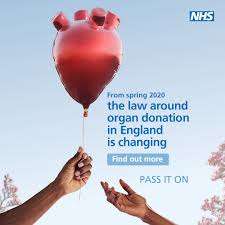 “Hindus and Jains are generally positive about organ donation, but we do need to continue to explain the change in law and what this will mean in practice, in the run up to 2020. People should fully understand the changes to the law and the choices that are available to them,” said Kirit Modi, Chair of JHOD. “I am delighted that many Hindu and Jain community leaders are ready to work with NHSBT to undertake this task. JHOD has been established recently to co-ordinate this work and offer support to anyone wishing to be involved. We have already started to plan the development of faith specific resources (videos and leaflets) which can be used in community events and through the media to drive home key messages across.”

In March 2018, there were 959 Asians waiting for an organ transplant in the UK. In 2017/18, there were 106 Asian donors in the UK; 37 were donors after death and 69 were living kidney donors. In a survey of black and Asian adults carried out in England in May 2018, 64% of the 103 Indian respondents said they would definitely donate or consider donating some or all of their organs, 25% had not decided and 12% said they definitely would not donate organs.