The forthcoming OIC foreign ministers meeting in Pakistan scheduled in April 2020 will be an answer to Saudi Arabia’s rivals, Iran, Malaysia, Qatar and Turkey’s meeting held in Kuala Lumpur in December 2019 to discuss reforms in Muslim world. Riyadh considered it as a challenge to its leadership of the Muslim world, and therefore, Saudi Arabia told Pakistan not to attend it … writes Dr Sakariya Kareem

Undaunted by Muslim world’s indifference to its Kashmir cry at the United Nations General Assembly in September, Pakistan has forced India’s close friend Saudi Arabia into agreeing to call a special Organisation of Islamic Conference (OIC) meeting to discuss Kashmir.  The OIC meeting, which may take place in Pakistan in April 2020 will be an answer to Saudi Arabia’s rivals, Iran, Malaysia, Qatar and Turkey’s meeting held in Kuala Lumpur in December 2019 to discuss reforms in Muslim world. Riyadh considered it as a challenge to its leadership of the Muslim world, and therefore, Saudi Arabia told Pakistan not to attend it.

On Saudi’s behest Pakistan boycotted the Kuala Lumpur meeting but demanded in exchange a special OIC meeting on Kashmir. This meeting will be of Foreign Ministers level.  By agreeing to Pakistan’s demand, Saudi Arabia has courted India’s displeasure; allowed hostility with Iran to increase and distanced itself from Turkey and Malaysia – two Sunni countries.

But how effective OIC resolutions can prove? Zero.  Members of the OIC individually seek India’s friendship.  In the past, Pakistan gave a call that OIC countries should snap their trade relations with India, but its elected leaders always gave a call for more trade relations with India.  During the rule of General Zia-ul Haq, private trade with India was stopped.  But as a result, Pakistan’s shops were filled with India smuggled goods.  There was nothing in shops that was not Indian.

On Pakistan’s prompting, the OIC has often passed resolutions on Kashmir annoying India, but this was done very mechanically without members’ heart in it.  Pakistan was dismayed that in spite of passing the Kashmir resolution, the members sought India’s goodwill.  The last OIC meeting in March was very frustrating for Pakistan. This meeting was called by Pakistan to mainly discuss Kashmir, but the organizers removed Kashmir from the agenda and put Israel and China instead. But worse came for Pakistan when it invited India’s Foreign Minister as the Special Guest.  Pakistan felt very humiliated.  It boycotted the OIC meeting.

In Pakistan, there was criticism of its reaction. One commentator said Pakistan’s friends in the OIC were friends of India as well.   Pakistan should have learnt its second lesson at the time of UN General Assembly (UNGA) in September.  On August 5, India has abolished Article 370 from its Constitution ending the special status of Jammu and Kashmir.  Pakistan’s Prime Minister Imran Khan went twice to occupied Kashmir to tell the people there to wait till he made his speech at the UNGA.

But then what happened at the UNGA? Imran gave a fiery speech for 45 minutes condemning India and demanding implementation of UN Resolutions on Kashmir.  Only three members – China, Turkey and Malaysia – supported him on UN Resolutions on Kashmir.  Of them, China later back sided by saying the solution of the Kashmir question lay in bilateral talks between India and Pakistan.   That supported India’s insistence on bilateralism in relations with Pakistan.

The most notable truth about the UNGA was that except Turkey and Malaysia, no Muslim country showed any commitment to Pakistan’s stand on Kashmir.  One wonders what has inspired Pakistan’s renewed faith in the OIC’s support to its Kashmir cry after its humiliation in March when this 57 strong conglomeration of Muslim countries put aside Pakistan’s Kashmir agenda.

Last but not the least, the OIC must first think of the Muslims and Islam in China, where gross atrocities are perpetrated to Uyghurs in Xinjiang region

Going by the contents of Imran’s speech at the UNGA, one can expect Pakistan raising the cry of “Islam in danger” in India at the OIC meeting expected to be hosted by Pakistan in April.  Pakistan may project India’s Citizenship (Amendment) Act, 2019 (CAA), and the National Register of Citizens (NRC) as anti-Muslim measures.   It may also talk of human rights situation in Kashmir after the abolition of Article 370 which had given a special status to Kashmir.  There are reports that Saudi Arabia and the United Arab Emirates   are quietly concerned about these measures.  Pakistan would certainly try to exploit the sentiments.

One can imagine what might happen in the OIC meeting in April.  Pakistan, as the host country, will produce or dictate a tough resolution against India to be passed by mostly indifferent members.

India has to take precautions here because Pakistan with its biased half knowledge of CAA, NRC and the Article 370 can mislead OIC members, who might have no clear idea about them, into believing that under the BJP Government Muslims are no more safe in India.  With its talent of speaking lies, Pakistan may try to make up for its failure at the UNGA and thus silence those in the country who accuse Imran of selling the Kashmir cause to India.

Also, by maligning India as an anti-Muslim country, Pakistan by implicating India, will be justifying growth of Islamic militancy in the country, in spite of all its efforts.

Going by the past, OIC resolutions on Kashmir prove very innocuous yet they give a bitter taste in the mouth of India because they were passed by its own friends in the Muslim world.  May be these resolutions reflected India’s own PR failure in the Muslim world. Our interaction with Muslim countries big or small is needed today more than before to counter all the propaganda relating to CAA, NRC and Article 370.  Newspaper reports indicate that Pakistan has expanded its Kashmir propaganda to include CAA, NRC and the BJP as a Hindu fundamentalist party.  Before the next OIC meeting starts, India should counter this propaganda.

In March last year, the OIC had given a clear indication that it would not allow Pakistan to dictate its relations with India.  India should ensure that this spirit is not lost.

The BJP government must ensure that its members do not make statements that do not reflect the government policy but boost Pakistani propaganda about Kashmiri people and Indian Muslims. Tit-bits of such statements when put together can really present a picture far from reality but close to Pakistan propaganda lines.

Last but not the least, the OIC must first think of the Muslims and Islam in China, where gross atrocities are perpetrated to Uyghurs in Xinjiang region. 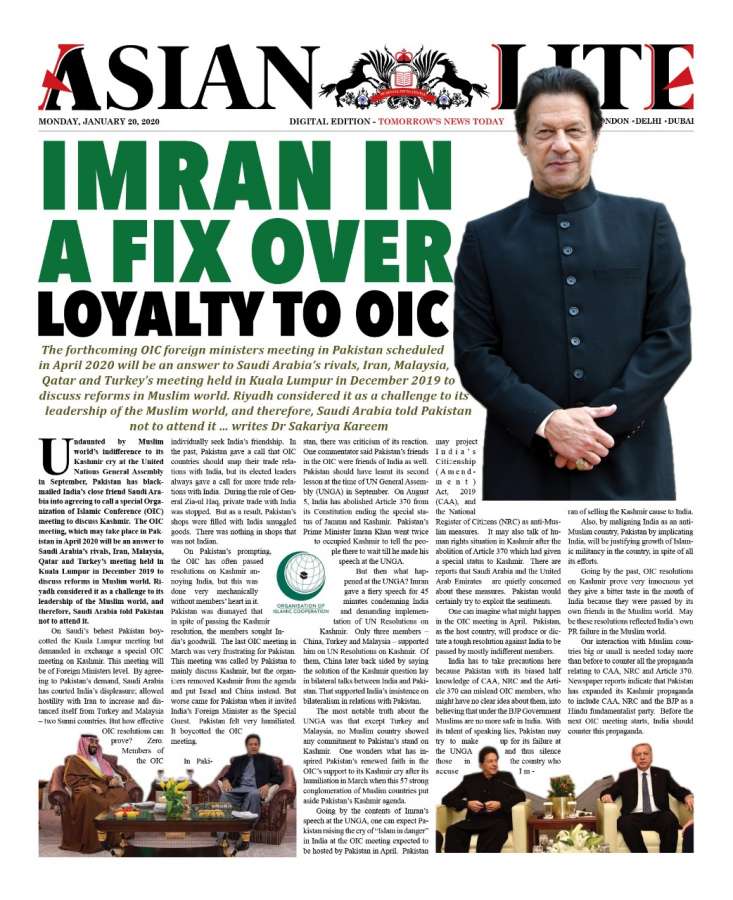