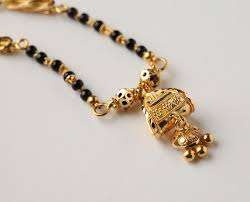 Terming the “thali” or “mangalsutra”, traditionally worn around the neck by married Hindu women as long as their spouses are alive, a symbol of slavery or oppression, 21 married women discarded it at a function organised by Tamil outfit DK in Chennai.

According to the statement, DK said 21 married women removed their “thali” on the 124th birth anniversary of B.R.Ambedkar, the father of the Indian constitution.

According to DK, the event got over even before a division bench of the Madras High Court issued a stay order on the function.

The DK announced the “thali” removal programme after protests by Hindu Munnani against television channel Puthiya Thalaimurai over its proposed programme on women wearing “thali”.

The Tamil TV channel later cancelled the programme but two tiffin box bombs of low intensity were thrown at the channel’s office.

Tying a “thali” or “mangalsutra” by the groom around the brides neck is a major custom in Hindu weddings. A woman removes the “thali” only on the death of her husband.