Sharmila Tagore, bikini clad diva turned powerful actress, tells Sahana Ghosh that she is against imposing any rules on the younger generation 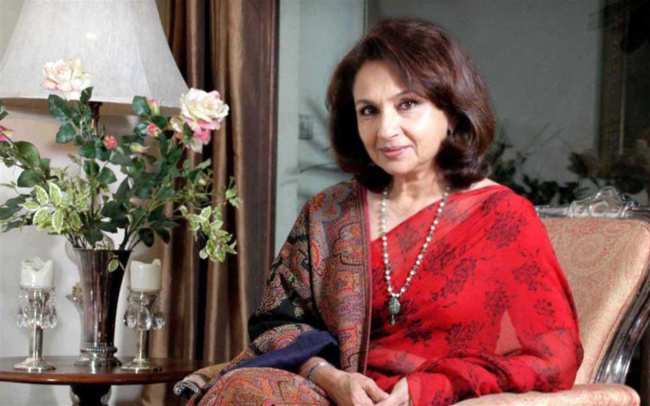 Icon Sharmila Tagore shattered stereotypes in Indian cinema and still continues to make heads turn in her public appearances. The versatile actress, who hasn’t been seen in films recently, believes seniors in the film industry are still treated with respect and not brushed aside even though the young generation has taken over.

After facing the arc-lights for half a century, the cinema veteran, mother to actors Saif and Soha, is supportive of the younger generation having their way.

“I have been working for long and there comes a time when the young generation takes over. This is a country of very young people. Naturally they want young people on screen. It’s very nice, we have a young workforce, confident, intelligent and ready to face the world,” said Tagore.

Tagore made her acting debut at the age of 13 when she began shooting for auteur Satyajit Ray’s “Apur Sansar” (World of Apu), the last in the celebrated Apu trilogy. The film was released on May 1, 1959.

Since then, audiences have seen the multiple National Award winner transform from film to film. Be it Tapan Sinha’s “Nirjan Saikate”, Hrishikesh Mukherjee’s “Anupama” or Shakti Samanta’s “Kashmir Ki Kali”, Tagore’s repertoire has been a rare combination of critical and commercial success at a time when women were cast in secondary characters.

Related by birth to the famous Tagore family of Bengal that gave to the world Noble laureate Rabindranath Tagore, she continued her winning streak with meaty roles even after her marriage to Indian cricketing legend Mansoor Ali Khan Pataudi. And at 70,, the graceful Tagore, on an acting break, concedes “working is tiring”. Additionally, she is conscious of the fact that seniors have to behave responsibly.

“And we also have a place because in India, as you have seen, senior people are still respected and it’s not as if we are brushed aside. We also have to behave and we shouldn’t impose ourselves and behave as if we are competing with the younger generation. So, there is space for all of us,” the Padma Bhushan awardee explained.

From being the sex symbol of yesteryears (bikini clad diva in “An Evening in Paris”) to delivering power-packed performances in cult movies like “Aradhana”, Tagore exuded confidence in the most demanding of roles that she was cast in by the masters of Indian cinema.

“It’s come from experience… not just (working with) Satyajit Ray. That’s an important factor, he was my mentor, but I have worked with Tapan Sinha, Asit Sen and so many wonderful directors. In Bombay (Mumbai) I have worked with Hrishikesh Mukherjee; so everybody has contributed to being who I am today,”Tagore said.

In the 1960s, her bikini shoot for a magazine cover (the first Indian actress to do so) created quite a stir. Her famous bouffant set the trend.

How did she take the criticism that came her away?

“They are good in a way. Nobody likes to hear them. Everybody is emotionally vulnerable, but in the long run we are public figures. Some will like us, some won’t. We have to develop a coping mechanism,” Tagore explained.

Both her star children have developed their own ways of dealing with criticism, she added.

Is there anything that she has gained from the younger lot?

“How to travel light… Soha has taught me to do that. And also I have learnt to be a bit more relaxed. The younger generation is relaxed and multi tasks,” Tagore quipped, adding she is “getting there” when it comes to being tech savvy.