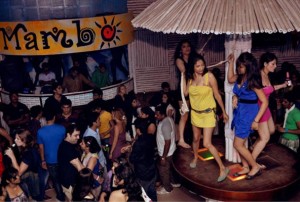 “Young girls wearing short skirts in nightclubs are a threat to the Goan culture,” Dhavalikar told reporters on the sidelines of an inauguration function in Panaji late Monday.

“This habit of young girls wearing short dresses everywhere does not fit the Goan culture. What will happen to it if this continues? We should not allow this. It should be stopped,” Dhavalikar said.

Dhavalikar also pointed out a young girl wearing a short skirt standing in the same hotel lobby, expressing disapproval over her clothes, much to the chagrin of her mother, who asked the minister to desist from making such comments.

Dhavalikar’s comment comes on the heels of similar statement by Sri Rama Sene (SRS) chief Pramod Muthalik, who wants to start an SRS unit in Goa ostensibly to stop women from wearing short skirts and the “culture of drugs, sex and nudity” and preserve the “Indian culture”.

Dhavalikar also said he agreed with the arguments made by Muthalik, whose SRS came in light after its members attacked young men and women for drinking alcohol in a Mangalore pub.

“What he (Muthalik) is saying is not all that wrong,” Dhavalikar said.

Asian News from UK
Leading Newspaper for Politics, Business & Economy
Goa News
We use cookies on our website to give you the most relevant experience by remembering your preferences and repeat visits. By clicking “Accept”, you consent to the use of ALL the cookies.
Cookie settingsACCEPT
Manage consent