The annual Neerja Bhanot Award was instituted in 1991 in memory of the brave Senior Flight Purser, Neerja Bhanot, who saved hundreds of lives while sacrificing her own, during a Pan Am plane hijack at Karachi Airport in September 1986.

The award consists of Rs. 1.50 lakh, a citation and a trophy. 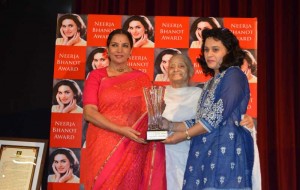 t the true courage and compassion shown by both Neerja and Rashmi are highly inspiring for everybody.

Azmi raised a very important question: “What is it that drives a person to give up everything, including her life, for someone else, unknown to her and basically a stranger till that moment in time?”

Citing examples, Azmi asked, “What would Neerja have been thinking of when she opened the door of the plane and, in spite of the bullets flying all around her and hand grenades exploding, she decided not to jump out and run away but instead do her duty and help the passengers escape? Or, why is Rashmi today spending time in dingy police stations and counseling women suffering from gender and domestic violence? What drives a person to do all this?”

Azmi opined that this was a matter for deep research and it would be good if some University or State institution did this.

Talking about domestic violence and the attitude of society, including close relatives, Ms. Azmi said, “Somehow, I find it strange that some parents who have brought up their daughters with such love and affection, tend to literally abandon them when they are faced with a violent or unhappy marriage. Why? Why should we ask a woman to tolerate injustice and ask her to compromise with her fate?”

“Let us all take a pledge today to help and support any victim of gender and domestic violence. Let us, as a community, decide that there will be zero tolerance for such injustice and take proactive steps to help the victim. Let us all help each other to live happy, successful lives. Let us, also, build compassion for our fellow human beings in our lives,” she exhorted the audience.

Accepting the award, Rashmi Anand  said  “I am proud to receive this award as it represents the spirit of Neerja Bhanot’s determination and grit in the face of overwhelming circumstances. A woman must not tolerate injustice and must learn to stand up for her rights, come what may.”

Congratulating the aAwardee,  Rama Bhanot, Managing Trustee, Neerja Bhanot Pan Am Trust exhorted her to continue with her mission to help the less privileged women. “We are proud of you,” she said, “and we look forward to you spreading compassion, love and affection to even more women in the coming years as you are a true Neerja heroine.”

Irfan Khan, Trustee, Neerja Bhanot Pan Am Trust talked about how the Trust was formed and the way the Trust has been promoting the two core values of Neerja: Do your duty, come what may and never tolerate injustice or compromise on self-respect.  He spoke about the care and attention to detail with which Harish Bhanot and the trustees had structured the Trust in living up to the high ideals of Neerja.

Akhil Bhanot, brother of Neerja read out poems written by Harindranath Chattopadhya and V S Shirali shortly after the hijack.

Rashmi Anand suffered domestic violence for over 10 years. She suffered it silently, wearing Chinese collars and full sleeves even in the height of Delhi’s summer so that no one could come to know what was happening with her. Traumatised and fearful, she left the violent marriage after 10 years with 2 children, a daughter, then 9 and a son, then 5. Her little daughter had become quiet and withdrawn and her son had stopped speaking completely.

Anand is a true example of guts and grit, who decided to break free from a cruel world inspite of all he social stigmas attached with it. She is also a true example of compassion because; she works with issues of gender and domestic violence, having voluntarily counseled hundreds of women at the Crime Against Women Cell of Delhi Police at Nanakpura over a period of four years. In fact, the Delhi Police 2010 calendar was based on her first book and on her life.

She runs a Trust, the Woman of the Elements Trust, which provides free legal aid to women and child victims of violence, all who are below the earning capacity of Rs. 5000. She gives talks and lectures in schools and colleges and students at the university level – on the human spirit, on courage, choices and strength. She has also authored a number of books. 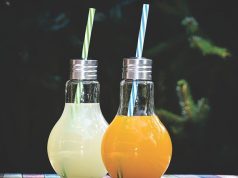 Sugary drinks up heart disease risk in women by 20%