Lord Ranger, in an interview with India Today journalist Loveena Tandon, said that he had recently informed the prime minister about the separatist activism in the country. Lord Ranger noted that he will put pressure on Home Secretary Priti Patel to ban all such kind movements or protests in the country.

“I had asked the Prime Minister that there are some separatists’ organisation working for Khalistan movement. They want to separate the Indian side Punjab from India,” Lord Ranger told India Today.

Following the tweet, Sikh Federation of the UK responded with anger.

Labour MP Preet Kaul Gill also wrote in reference to the demands of Sikhs for a separate nation of Khalistan. She noted that “the principle of self-determination is prominently embodied in Article I of the Charter of the United Nations” and she was worried about his divisive kind of tweets by Lord Ranger.

“My Tweets are against lacklustre Khalistanis who wish to divide Sikhs from the rest of India. If anyone considers my Tweets as divisive, they need to understand the philosophy of Khalistanis who are going against the teachings of our illustrious Gurus,” Lord Ranger responded to Gill’s reaction.

Lord Ranger urged the Government of India to be careful of foreign powers and their hidden agenda against India and its progress. They always encourage racial-religious hatred among people. Whenever the organizations get banned, they come up with other names which can’t be promoted rather educating them importantly they are against the teachings of Sikh Guru.

The SFJ has announced a $125,000 reward for anyone who hoists a Khalistan flag at the Red Fort on Independence Day on August 15. Security agencies have meanwhile assured that it is “just an attempt by the SFJ to create panic”. 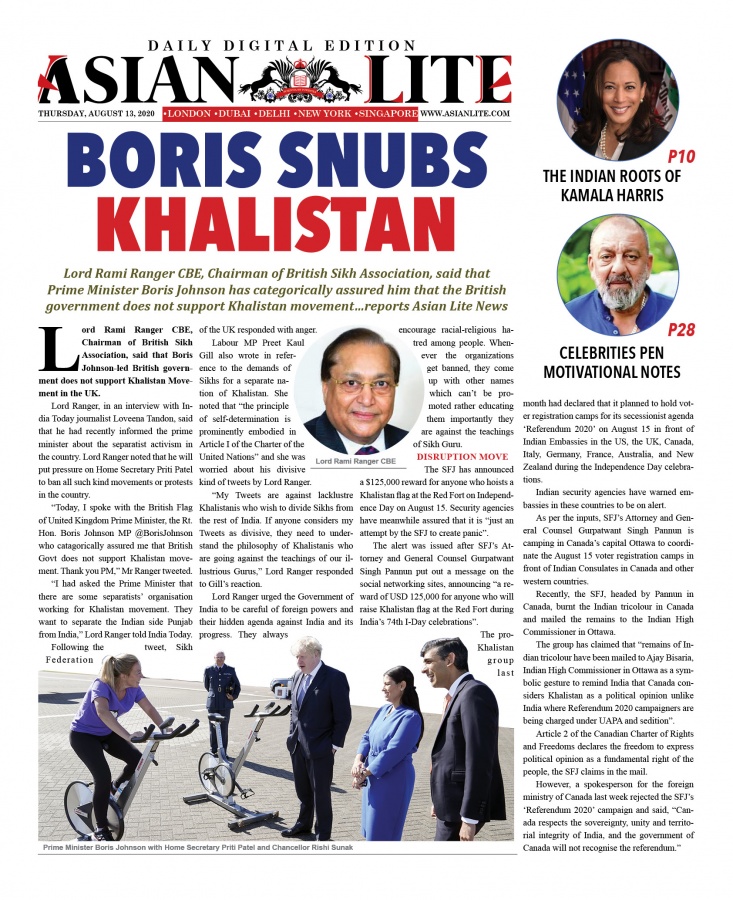 The group since July 4 has chosen Punjab, Delhi and Jammu & Kashmir to launch its online voter registration for the ‘Referendum 2020′ through different portals but reportedly could not gather support.

Punjab Police on June 18 had booked Gurpatwant Singh Pannun, of ‘Sikhs For Justice’ for sedition, unlawful activities and enticing Punjab youth for ‘Referendum 2020′ and attempts to spread dissatisfaction among the Indian armed forces. Meanwhile, Punjab CM. Amarinder Singh said the stand taken by the Canadian government was exemplary and other nations should also come out openly against the SFJ, banned by India as a terrorist organisation, and whose founder Gurpatwant Singh Pannu has been declared a terrorist for promoting Pakistan-backed terror activities on the Indian soil.