The Pakistan government has frozen a total of 964 assets of proscribed organisations Jamaat-ud-Dawa (JUD) and Jaish-e-Mohammad (JeM) as it takes action against elements involved in terror financing and money laundering as part of efforts towards fulfilling requirements of the Financial Action Task Force’s (FATF) 27-point action plan.

As per the the Interior Ministry, 907 of the frozen assets belonged to the JuD and 57 to the JeM.

Minister of State for Parliamentary Affairs Ali Muhammad Khan said that the provincial home departments had taken the action to freeze assets of the JuD and the JeM under the United Nations Security Council (Freezing and Seizure) Order 2019, issued by the Foreign Affairs Ministry.

“A total of 611 properties of the JuD were frozen in Punjab, 108 in Khyber Pakhtunkhwa, 80 in Sindh, 61 in Azad Jammu and Kashmir (Pakistan-occupied Kashmir), 30 in Balochistan and 17 in the Islamabad Capital Territory,” he told the Senate, the upper house of the Pakistani legislature, about the government’s progress against proscribed outfits.

“Eight properties of the JeM were frozen in Punjab, 29 in Khyber Pakhtunkhwa, 12 in Azad Jammu and Kashmir, four in the Islamabad Capital Territory, three in Sindh and one in Balochistan,” he added.

The frozen assets of JeM, Khan said, include “53 mosques and seminaries, two dispensaries and two ambulances”.

The steps come at a time when Pakistan is working hard to comply with all the 27 points of the Action Plan given by FATF to see itself out of the ‘grey list’.

Earlier this year, a Pakistan anti-terrorism court sentenced JuD chief Hafiz Muhammad Saeed to five years and six months imprisonment in two cases, after finding him guilty of terror financing and association with other banned outfits. 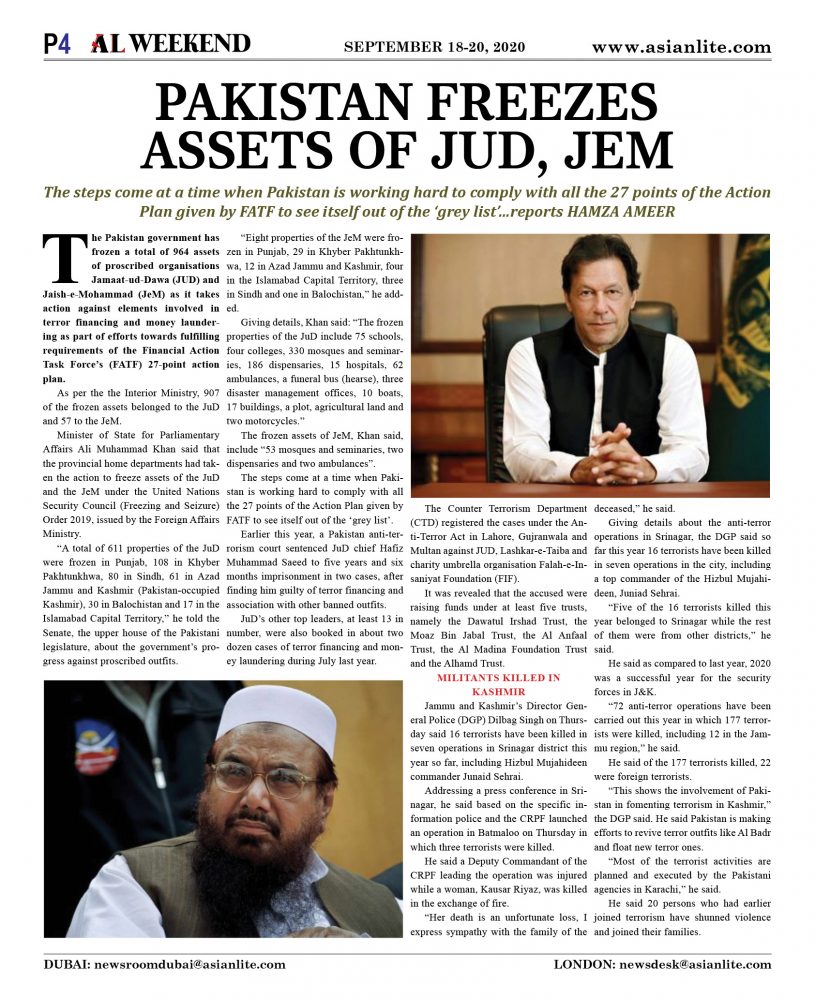 JuD’s other top leaders, at least 13 in number, were also booked in about two dozen cases of terror financing and money laundering during July last year.

It was revealed that the accused were raising funds under at least five trusts, namely the Dawatul Irshad Trust, the Moaz Bin Jabal Trust, the Al Anfaal Trust, the Al Madina Foundation Trust and the Alhamd Trust.