The international scene is currently marked by a deteriorating US-China trade relationship, emergence of a new level of friendship between China and Iran through a long-term strategic pact and a definite operationalisation of Sino-Pak alliance against India, particularly in the months following the abrogation of Art 370 relating to Jammu and Kashmir, by the Indian Parliament.

As the presidential election in the US draws close, the Trump administration is taking on China on multiple fronts — from the alleged Chinese complicity in concealing facts about the origin and spread of the Corona virus to the aggressive behaviour of China in Hong Kong, South China Sea and Ladakh. The US ordering closure of the Chinese consulate at Houston in July on charges of commercial espionage and the Chinese in turn shutting down the American consulate at Chengdu are ultimate signals of the beginning of a diplomatic break and, in a world not totally disrupted by the pandemic, this would have already created global tension.

President Xi Jinping of China, who is now the ruler of his country for lifetime, has been assiduously building the Chinese economic hold on countries of Asia, Africa and even Europe and consolidating the PLA as the integral Chinese machinery of offence and defence equipped with technology of global supremacy. His mission of making China the second superpower that could take on the US has been made implicitly public in many ways. Significantly, the aggravation of American conflict with China on several issues has occurred in a time period that brought in the deepest convergence of economic and security interests between the US and India under the leadership of Donald Trump and Prime Minister Narendra Modi. There is, therefore, no getting away for India from framing the right strategic set of economic, security and foreign policies in the long term to handle a likely shift of the world towards a new Cold War between the US and China and, at the same time, find its place in the international order — in keeping with its say in global affairs and the status that it enjoyed as the largest and well-established democracy in the world.

India has to closely watch alignments within the Muslim world, take stock of Imran Khan’s government in Pakistan — with its known subservience to the Pak army — in the context of its nexus with China that was now evidently at the cost of Pakistan’s relationship with the US and review its own military capacity to deal with simultaneous provocations from across the LOC and LAC. There is also the crucial factor of India achieving full recovery after the deep-seated damage caused to its economy by the Corona pandemic, both at the national and global levels. China has suffered the loss too and is exposed to a further hit from the international businesses withdrawing their bases from that country, at least partly because of the US pressure. India is now clearly on the side of the US in the trade conflicts cropping up between the US and China — the ban put by President Donald Trump on Tik Tok, something that India had already done, is the latest blow to China.

Meanwhile, the Chinese military build-up along the LAC, that led to a clash between the two armies at Galwan on June 15 resulting in the death of 20 Indian military personnel including a Lt.-Col, has set off unprecedented hostility between the two countries that could easily become irreversible — unless China accepts an effective push back in the Ladakh sector of LAC. There is no indication of this happening — Chinese seemed to be pursuing the old ‘two steps forward one step backward’ policy — and India has therefore to reset its China policy taking all global paradigms into consideration.

Prime Minister Narendra Modi’s speech from the ramparts of the Red Fort on Independence Day confirmed that India was putting a new policy in place not only on China but also on the entire gamut of international relations taking into account all geo-political developments of significance. The dominant part of the address was devoted to detailing the strategy of economic revival that was being implemented in the wake of the Corona pandemic — the Prime Minister was right in claiming that India had controlled the damage well. At the core of the revival strategy was the emphasis on rebuilding the indigenous potential, truly becoming ‘vocal for local’ and pushing the quality of home production to a point where it easily linked up with the global supply chain whenever the opportunity for this came by. He appealed to the foreign investors, particularly the US players, to avail of the opportunities that India with its new emphasis on ‘ease of doing business’ offered at present. The speech remarkably succeeded in creating an environ of optimism among the people on the economic front.

The Prime Minister, in a succinct manner, also revealed the strategic framework of the national security and defence policy on the occasion. Indicating that India had a complete understanding of the nefarious Sino-Pak alliance working against it, Prime Minister Modi declared that India would deal with the border situation from LOC to LAC and referred to the threats of terrorism and ‘expansionism’ in this context. The Prime Minister listed measures from drastically cutting down on defence imports in favour of indigenous production — to encourage self-dependence — to sourcing the best fighting machinery and accelerating the infrastructure building work along the LAC. He specifically announced a scheme for inducting youth in Indian defence forces in a big way through stepped up NCC training in border and coastal districts as well as in the districts that housed our air bases. The idea is to divide this training work amongst the army, navy and air force. People will have the satisfaction that the Modi government was equally alive to issues of both development and security. Prime Minister Modi, no doubt, is the right man at the right time for the country. 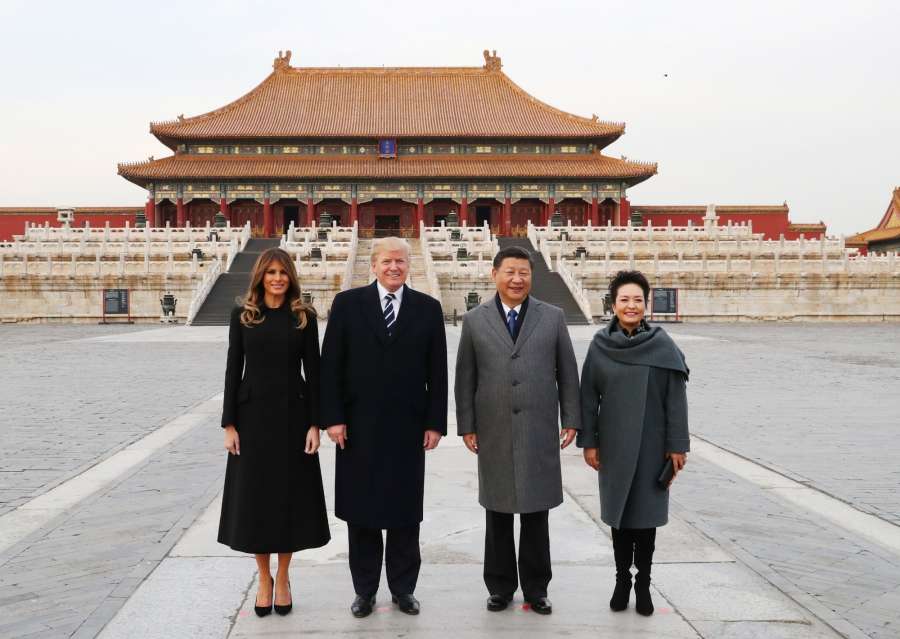 It needs to be mentioned that certain geo-political developments are accentuating the US-China antagonism and gradually pushing the world towards a new Cold War. China’s planned move to use Pakistan for acquiring a hold in the vital Pak-Afghan belt adjoining Jammu and Kashmir where China had taken illicit possession of territory in the name of CPEC, a comprehensive new pact between China and Iran — Iran was already a part of Bridge and Road Initiative(BRI)– that inter alia provides for building the Special Economic Zone for Chabahar port and the US-sponsored truce between Israel and UAE — the latter representing the collective of Islamic nations favouring the US — on the West Bank settlements, are straws in the wind indicating how a deep seated polarisation of geo-politics along US-China divide was in the offing.

Within the Muslim world there is an established trend now of alignments developing for or against the West, the forces of Sunni radical Islam in Afghanistan, Syria, Iraq and Yemen etc, represented by Al Qaeda-Taliban combine and ISIS, lead the combat against the US in the ‘war on terror’ while the OIC leadership sides with the US in this conflict. Iran following the radical Shiite line that ideologically hated the capitalist US — Caliph Ali is said to have glorified poverty — has unsurprisingly joined hands with China politically. Pakistan typically illustrates the duplicity of a country which sheltered radicals, pretended to be helping the US in Afghanistan and struck an alliance with the communist dictatorship of China to get its support in its ‘proxy war’ against India — notwithstanding the fact that China was subjecting the Muslims of Xinjiang to unimaginable atrocities. A noteworthy feature of the Muslim world today is the convergence of stance between three important fundamentalist Islamic nations — Pakistan, Turkey and Malaysia which are neither pro-US nor uncomfortable with radicals. They are together in opposing India’s stand on Kashmir. 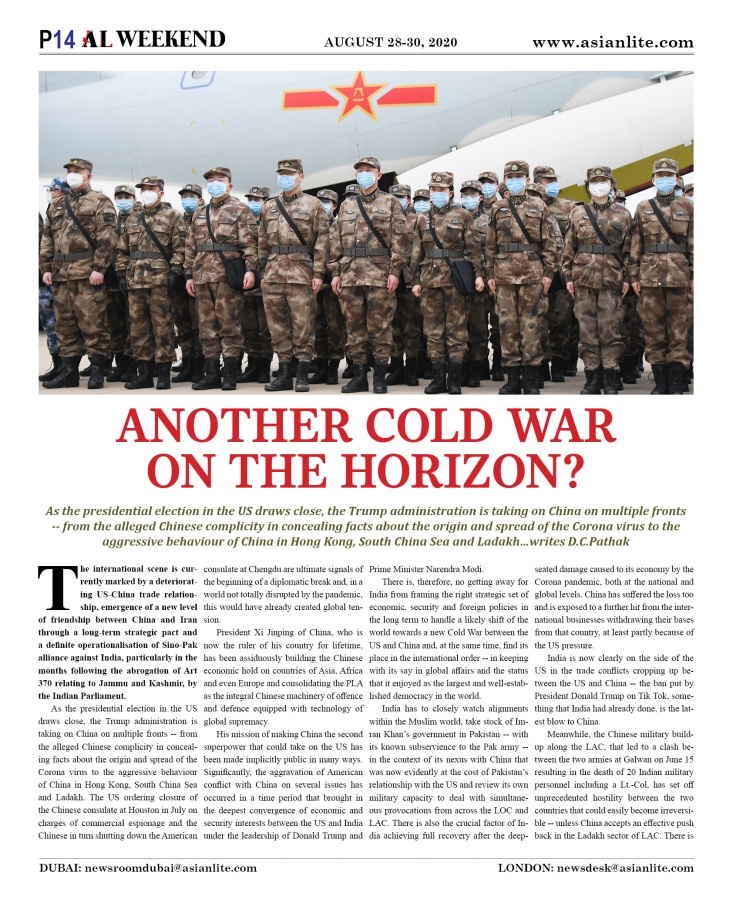 India under Prime Minister Modi has done well to shed the ideological baggage of the days of non-alignment to fashion its international relations in the best economic and security interests of the country. For India, Sino-Pak military alliance is a nexus of Communist dictatorship and a fundamentalist Islamic regime that promoted terrorism — this country, therefore, has to be decisively on the side of the democratic world led by the US. While India would be handling on its own any aggressive postures shown by China and Pakistan on the borders singly or in concert, it would be prudent on its part to support US-led initiatives to maintain maritime security of Indo-Pacific and Indian Oceans. Prime Minister Modi specifically mentioned in his Red Fort address that India attached special importance to friendly relations with countries of South East Asia as well as those of West Asia — these must receive the highest attention of our diplomacy in the scenario of a geo-political cleavage developing around US-China polarisation. Indian diplomacy is also on test in not letting Pakistan and China have a controlling say in Afghanistan and in working with both US and Russia to preserve the democratic character of that country’s future rule.

India has handled international relations and the issues of external threats to national security very well. However, the country remains vulnerable to faith-based militancy instigated by Pakistan as part of its proxy war against India, exploiting the communal politics that has been a major feature of our domestic scene. Pakistan is out to foment trouble in India through its agents provocateurs after the launch of the Ram temple at Ayodhya — it had already stepped up infiltration of terrorists in the Kashmir valley following the abrogation of Art 370 of the Constitution by the Indian Parliament. These are times when India must intensify vigil at home against acts of terrorism and other subversive activities flowing out of Sino-Pak collusion while making necessary preparations for strengthening the defence of our borders and marine frontiers.

(The writer is a former Director Intelligence Bureau)