‘India’ descends at Waterloo Station in London – It is Inspiring Indian Women’s INDIAN PANORAMA. This was the first time glimpses from all the parts of India spread the breeze of cultural unity all across and refreshed the commuters to stop and sense the joy and vibrant colours of India

It also gave the feeling of sense of pride and belonging to this nation, United Kingdom where in each community is valued and respected.

The soul of the event was the most popular Bollywood choreographer Jay Kumar and his Jai Ho team.  Special efforts were made by Pooja Nikhil Patel founder EVENTS 2 EMPOWER Barking to bring in Poonam, Jyoti, Soumia, Neha, Sushma and Sangeetha  to sing and dance. Little Tanvi Vijay performed on Maiya Yashoda,  Sanjana and Sai Pranitha performed solo dance each, Khushbu Trivedi’s  cute kids Kalp and Aarna made the audience sway to a very popular Rajasthan number,  Malaika Jha and Samaika Jha ended the event playing the national anthem on Clarinet,  Goosebumps were felt when the station echoed with ‘Made in India’ by little Tanisha Hajra from Croydon.  The programme saw a Kaleidoscope of performances from Anvi  ( Bharatnatyam ) , Alkananda Mohapatra ( Odishi ) , Priya Kushwaha  ( Kathak ) , Monika Agrawal ( Nainowali ne- semi classical )dance . Ankita Somersetti ( Kuchipudi ) Among the solo performers were the upcoming stars  the effervescent Nisha George with her new release song ‘CHOREY’,  Melodious Shweta Dhall  singing Aye Vatan and Deepak Tripathi the popular Bhojpuri singer from India who became the first person to have sung a a Bhojpuri number from a public space in London.  Another group performance was from Bihari Community UK, led by Rajni Mahesh Patel  and others on Sadhana Sinha’s popular number.  Lastly one of the best Garba team Bollyfusion Puja Trived, Shah Anand , Kavita Gupta  and Milind Katudia made the audience sway to a Gujarati number. The entire programme which was supposed to end in one hour, continued for two hours. Passers-by wanted more and more. 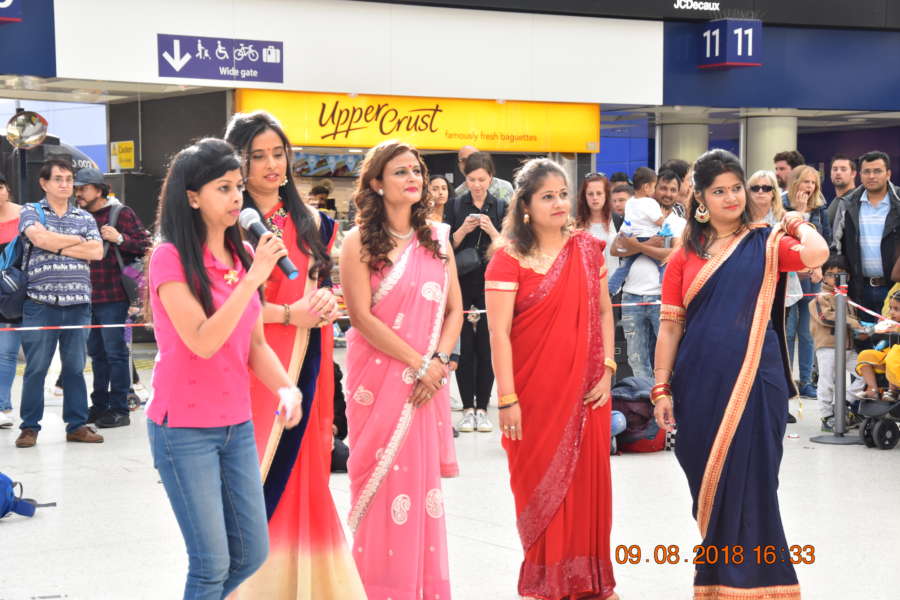 All those who couldn’t make it regretted and have already started talking about when next?  The event in all showcased the true spirit of India and strengthened the concept of Unity in Diversity. It was indeed am incredible feeling to hear National Anthem at Waterloo!!